Every development project and its site bring forth unique challenges for the design team.

When multiple developments have similarities in both building and site, architects will often analyze what design strategies worked best and can be used on other sites.

Link, Stoneway Village and the Fremont Apartments are three such mixed-use multifamily projects with sites that are large, long and sloping. Although these projects are in different phases of work — one completed, one in construction and one in design — the similarities of their site and program are apparent.

The sites are more than 300 feet long, each with a story or more of grade change; and each program has subterranean parking, street-level retail and a dense residential mix above. The sites’ slope, building length and neighborhood context are three areas critical to each project’s unique design and required special attention. 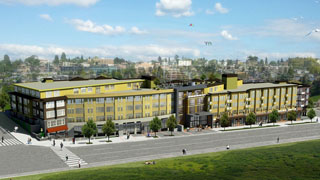 Working with any one of large, long or sloping site variables can be a challenging part of the design.

The slope is usually the main culprit to be managed for the building’s retail entrance points. The street-level retail would naturally want to be on the least steep portion of the site. However, this is not always feasible and forces steps in the slabs or building.

The Link Apartment project, which was the first mixed-use building in the Fauntleroy Triangle District, dealt well with site slope. Completed in 2011 this project offers creative, affordable and accessible housing in West Seattle. The six-story building combines 13,000 square feet of street retail with 200 residential units, and a level and a half of subterranean parking with 170 stalls.

The solution at Link was to trifurcate the internal program, then to define external forms and accent each form with multiple changes in textures, materials and colors. This created a deeply textured building scale that allowed the pedestrian street frontage retail suites to then be accessed via hardscape materials at complementary points along the sidewalk. The addition of lush landscaping to support the hardscape buffers against the street traffic and completes the composition.

The completed Link building projects a very straightforward, visually direct, facade along the street. The team’s ability to define the three-step locations that brought about this apparent simplicity was not quite as straightforward but to the retailer and user, this critical relationship is the key to successful, desirable retail suites. 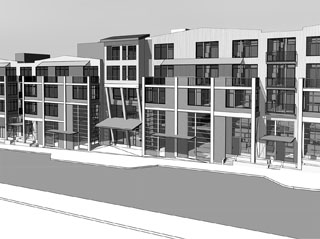 Image by Baylis Architects [enlarge]
Live/work units are nestled with residential units at the Fremont Apartments to enhance the neighborhood’s pedestrian experience.

Housing is a great land use in dense urban areas. Most urban sites are compact, however not all are, which raises the question for large, long buildings: “How much of a pattern can be repeated before the result is not attractive?”

That question was especially debated on the Stoneway Apartment project. Currently in construction, the building consists of three stories of housing over street-level commercial and will maximize the height and floor area ratio allowed in the NC3-40 zone. There will be 147 residential units, seven live/work units, 189 subterranean parking stalls, and 21,800 square feet of street-level, pedestrian-oriented commercial space.

The design solution considered the Stoneway building as a series of individual ones, each as unique, eclectic and spirited as its Wallingford neighbors. This “village evolving over time” design approach allowed strategic transitions of building masses and visually provided interest and relief from the building form as you move along the project.

The building types used were bungalow, bridgeway (simplified classical), gateway (post-modern), warehouse lofts (19th century industrial) and industrial cube (modern). Each building was given its own color and materials scheme that was complementary to the other building types, which created individual identity but retained cohesiveness to the overall project.

Additionally, the different building types were located on-site to correspond best to the neighboring building types. This ensured a consistency to neighborhood massing forms, as well as with building steps, to bring the scale of the building forms down to the existing elements. 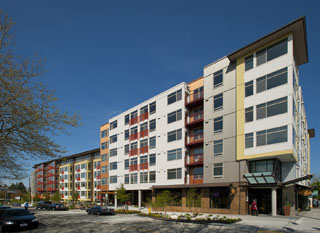 While some larger projects are able to change material or bay patterns and still be successful, it was the smaller existing and diverse neighborhood buildings that necessitated a more dramatic change in order to contextually fit in. The grade change alone would have made typical massing transitions difficult, so after considering the neighborhood character, the village concept neatly fit the project goals while resolving long building concerns.

Fitting in with users

Not all projects are built along busy commercial streets and in high-density areas. Many are being developed at the edge of these areas, providing needed infill density to neighborhoods that are rightly deserving of it and supporting a nearby denser core.

The architect’s challenge then becomes a study of the correct relationship between existing low-density users and the new higher-density developments.

The new building massing forms have to recognize the more residential character of the existing neighborhood and be sensitive in locating non-residential space. This non-residential use is one area the land-use codes can help the project team. Often live/work units are allowed, which can be visually cohesive with the residential building above allowing, along the exterior, for a less dramatic shift between existing residential and new commercial uses.

Obviously there are many users of commercial space that do not need a large storefront presence. The style of neighborhood live/work space is often more agreeable to existing single-family users since its scale and look are more sensitive to a transitional portion of a neighborhood.

The Fremont Apartments, which is in the design and permitting phases, is a good example of the sensitivity to urban edges and neighborhood concerns that projects face. Comprised of 182,000 gross square feet, this four-story mixed-use building will have about 160 units including street-level live/work units over two levels of subterranean parking with about 130 stalls.

The street-level live/work is an important feature for the Fremont project since it is across the street from low-rise residential and in a transition zone to a higher density area. Nestling the live/work units within the residential units enhances the pedestrian experience for this area, satisfies the non-residential use and provides viable commercial space. Additionally, the rhythm of the suites stepping down with the grade works well with the long sloping site and relates well to the pattern of the neighborhood.

The design approach to a project is important to its overall success. It is not always feasible to use the same strategy on all projects of similar conditions. However, it is important to identify what the pertinent issues will be.

For projects on large, long and sloping sites it is safe to conclude that you will be additionally challenged with the sidewalk-to-retail access, building massing character and how to integrate that character into the neighborhood. Resolving these successfully will provide a quality building design that the community sees as a welcome development as does its own users.

Kevin J. Cleary, AIA, is an associate at Baylis Architects. Cleary is active in urban mixed-use projects and is the project manager for Northgate II.