Modular apartment buildings on the rise

Developers of apartment buildings are continuously looking for ways to reduce construction costs and shorten timelines in the development of their properties.

Modular, factory-built structures are certainly not new to the industry, but there is increasing interest in the concept and it appears to have tremendous potential in Seattle and elsewhere. Like other production methods, however, it is not without its limitations.

For many, the term “modular construction” conjures up images of complete structures moving down an assembly line and being deposited on-site with keys dangling in the keyhole and wheels that need to be hidden from sight. There are manufacturers that come close to delivering such a product, but the industry is evolving and its offerings are now more diverse and versatile.

When it comes to modular construction in apartment development specifically, the term is defined more broadly. In this context, it refers to any sort of building element that is fabricated off-site and later delivered to the site for use. 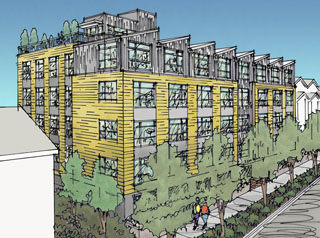 By the above definition, many elements of construction can be thought of as modular. This includes obvious components like windows, doors, kitchen cabinets and shower surrounds, but it is also not uncommon to assemble wood framing in an off-site factory and transport it to the site for installation.

The already frequent use of these smaller modular elements in apartment construction is one of the reasons that a shift toward larger-scale modular construction in the industry is a logical progression. Because a typical apartment building is mostly constructed on-site, the possibility of building a majority of the components in the factory is very interesting to us as designers and to our clients and partners as well.

Photo by John Keatley Photography [enlarge]
Modular construction has been more popular for single-family homes than apartments. Crews working for Cascade Built lowered in one of four modules that make up Alley House 2.

Modular construction has been used for many years to produce single-family homes, and it has also been commonly used to construct multifamily housing in industries that require rapid, large-scale expansion of their infrastructure.

The mining industry, for example, has used this method to create cost-effective camps for its labor force, and the U.S. government has constructed housing and offices for its military — both domestically and overseas — and for civilians in disaster-relief settings.

The idea of constructing buildings in this way is gaining mainstream acceptance for many reasons. First and foremost, the method offers what others cannot: accelerated project timelines. Separate modules produced in a factory arrive with finished interiors and systems, including carpeting, walls, windows, doors, appliances, plumbing and wiring. The entire manufacturing process occurs off-site while other work is simultaneously occurring on-site. This is largely how the time savings are achieved.

Such significant time savings may amount to substantial cost savings, too. Among other things, an accelerated construction timeline means the developers carry their financing costs for a shorter period, and the units can begin generating rental income sooner.

From a design standpoint, the notion that modular structures must be simple and rectangular is an outdated one. Skilled architects are now able to design permanent modular buildings that are indistinguishable from other buildings and can be constructed to almost any specifications.

Because the structural components of a modular building are manufactured in a controlled, dry environment, the process may also result in a higher-quality product and fewer weather-related delays. On a conventional construction site, framing materials may get wet in the rain or snow, for example, which may result in residual moisture in a completed building.

The method also directly benefits surrounding communities and, more broadly, the environment. Shortened timelines and fewer crews lessen the congestion, street closures, noise and other construction-related impacts on a neighborhood. There is less waste of construction materials because the number of cuts is optimized during the manufacturing process, and there is better reclamation of waste products in the factory setting.

While modular construction of apartment buildings appears to be a promising alternative to conventional construction methods, it has its share of potential challenges. Some of these can be so great that they eliminate the option from serious consideration while others are easier to overcome.

Among the challenges, modular buildings are not always well suited to dense urban settings. Most municipalities have imposed height limits on new buildings and, because some types of modular construction require more space between floors, the floor-to-ceiling height within the units may be reduced or, worse yet, an entire floor may need to be eliminated.

Similarly, when a site is zoned for five or more stories, it can be difficult or impossible to move modules into place with a crane at those heights. Power lines, trees, neighboring structures, or an inadequate staging area may also complicate or prevent the use of a crane.

In Seattle, for example, buildings above a certain height require mixed construction types, including lower floors made of concrete. This involves more on-site work and, if a developer needs to hire crews from the same trades to do similar work at both the factory and the site, it diminishes the benefits of modular construction.

Another consideration is the permitting process. In Washington, modular construction projects require approval from both the local jurisdiction and the state. While they can review the plans simultaneously, responding to two separate reviewing agencies does add a degree of complication.

Finally, financing can be a challenge. In some cases, the manufacturer of the modular units will require a substantial deposit prior to starting fabrication, and traditional construction financing can often be used only for work occurring on-site.

It is likely that some of these challenges will eventually be addressed as the industry continues to innovate.

Because many architects, general contractors and permitting officials don’t yet have any direct experience with the method, the successful completion of a project will require a strong, adept partnership from its inception.

Depending on the relationship between the general contractor and the manufacturer, additional coordination among the design and construction teams may be necessary from the beginning. It is also important to involve the mechanical, electrical and plumbing subcontractors in the design phase so their input can be incorporated early on.

While these are widely considered good practices on any project, they aren’t always followed in apartment development.

For many of the reasons I described above, it is not yet common to see factory-built, modular apartment projects in Seattle or other urban areas in Washington.

One of the primary reasons the method hasn’t been more readily adopted is the historically slow pace of change in the construction industry. Because of the substantial cost of large-scale construction projects, many developers are averse to gambling on an unfamiliar process.

Widespread acceptance and adoption is likely to occur only after there are innovators that successfully complete several examples that other developers can point to and learn from. Our firm currently has one such project in the pipeline and, along with our development partners, we’re eager to be among the pioneers in the Seattle market.

It is my view that, at this stage in its evolution, the benefits of modular apartment construction clearly outweigh any of the potential obstacles. As a result, it is becoming more common practice in Seattle and other markets as contractors, lenders and permitting authorities become more comfortable with the method.

This is good news for the industry.

Boyd Pickrell, AIA, LEED AP, has more than 15 years of experience in both architecture and real estate development. As a principal at Nicholson Kovalchick Architects, he oversees the daily operations of the Seattle office and serves as an advisor to clients and project teams.