Every hardworking family in the Seattle area deserves a home they can afford near work and schools that provides a stable place for their children to grow and learn. Yet as our economy grows, we are failing to share fairly the benefits of the recovery.

Home prices have risen in King County almost 20 percent since last year. Unemployment has dropped to 5.1 percent county-wide. Corporate profits are at all-time highs. Every week brings news of our strengthening economy in Puget Sound, which by all accounts is positively booming.

Seattle’s Capitol Hill neighborhood is a microcosm of this new growth. Construction cranes sprout on nearly every street corner like a forest of yellow iron. Young Amazon workers crowd shuttle bus and Metro stops, eyes glued to their iPads and smartphones, ready to invent the future with latte in hand. Jam-packed trendy cafes, bars and restaurants pop up seemingly overnight.

Look a little closer though, and a picture of growing inequality quickly emerges in our region, with higher wage workers benefiting from economic growth while lower wage workers struggle to make ends meet for their families. 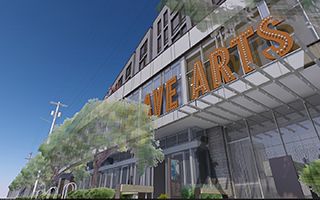 Twenty years ago, President Bill Clinton rightfully challenged the country that “people who work hard and play by the rules shouldn’t be poor.” Yet today, adjusted for inflation, the average household makes less than it did when Clinton occupied the White House.

A jump in low-wage jobs

According to the National Employment Law Project, employment losses in the Great Recession were concentrated in occupations paying middle-class wages. As the economy recovers, low-wage jobs such as food service, retail and administrative support are growing at a rate 2.7 times faster than higher-wage jobs. We have replaced the opportunity of becoming middle-class with the likelihood of just barely getting by.

As a result, many Seattle workers cannot afford a home for themselves and their families. The National Low Income Housing Coalition’s Out of Reach 2012 report shows that in King County, it takes a wage of $21.23 per hour to afford a modest, $1,104 a month, two-bedroom apartment, which is well over two times our state minimum wage. For a family earning minimum wage, this means needing to work 92 hours a week just to afford that same two-bedroom apartment.

In Capitol Hill, the situation is even more extreme, with Zillow recently showing two-bedroom apartments hitting an eye-popping a median rent of $2,100 a month. No one should have to choose between a stable home and having enough left over for groceries, gas and child care.

Capitol Hill Housing is meeting this challenge with its 12th Avenue Arts development in Seattle’s Pike/Pine corridor, having started construction in March on a unique mixed-use project combining low-income housing with a community performing arts center, office space for nonprofit groups and neighborhood-serving retail. The 88 apartments will be affordable to working individuals and families earning 60 percent of area median income.

12th Avenue Arts will be built to Evergreen Sustainable Development Standards, ensuring an environmentally sustainable building that is also a healthy place to live. Its location near many Metro bus lines, the First Hill Broadway streetcar and Sound Transit’s Capitol Hill light-rail station ensures that residents will have access to good transit to get to school and work.

What can we do?

The development of affordable housing like 12th Avenue Arts is an important linchpin in supporting working families and individuals.

Take the example of Farin Houk, a onetime Seattle public school teacher and mother to three young children trying to find an affordable home for her family while making ends meet. Her extremely long commute meant stretching her paycheck just to afford transportation — and that she only saw her children on the fly. She worried about the quality of life she was providing for her kids as a schoolteacher unable to spend time on her own children’s homework.

Fortunately, Houk was able to secure an apartment through Capitol Hill Housing in a building within a short commute to work. Today, not only does Houk have a home she can afford and time to raise her family, but she has found the stability needed to realize her dream of opening her own bilingual education school, preparing the next generation to participate in our globalized society.

More can and should be done. Our elected leaders in special session in Olympia should fully fund the state’s Housing Trust Fund at $65 million and focus on supporting affordable housing for working families and individuals. As we meet the state Supreme Court’s directive to provide quality public education in Washington, we must not forget that a stable home life is critical to success in school.

As we develop our mass transit systems like Sound Transit’s U Link extension, we should require low- and moderate-income housing investments be made at or near light-rail stations to ensure workers have access to both housing and transportation that is affordable.

Finally, Seattle needs to increase its efforts at inclusionary housing, by mandating that real estate developers citywide make a percentage of housing units in new residential developments available to low- and moderate-income households. It is a proven strategy that has been carried out successfully in jurisdictions around the country but so far not in Seattle.

The act of governing is about choosing the kind of community we build for each other and our children. Our budget and policy priorities must ensure that hardworking families are provided with good schools, access to jobs — and an affordable, stable place to call home.

David Dologite, director of real estate and sustainable communities at Capitol Hill Housing, has developed affordable housing in major cities across the country.