After going into hibernation for several years during the Great Recession, construction cranes and concrete pumps are once again omnipotent on our skyline, with most of them busy constructing apartment towers.

While some prognosticators say that we are headed for over-supply and another bubble, others suggest that we may not be able to keep up with demand going forward, as more and more people opt for in-city apartment living as a deliberate lifestyle choice. A third camp suggests that the almost extinct condominium project is about to make a resurgence.

At the heart of the debate is whether the two most influential generations that will determine future fate of housing — Gen Y and the millennials — will choose to rent or buy, in the foreseeable future. Many experts feel that these two generations will largely prefer the mobility and convenience of renting over the burden and responsibility owning, at least for the foreseeable future. 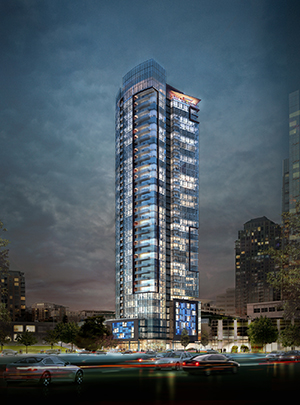 Weber Thompson/Studio 216 [enlarge]
Tall, slender and sculpted, the 2030 Eighth Ave. tower will reside on the trolley line across from the new South Amazon Campus. Illustrations:

Almost everyone seems to agree that the long-term prospects for Seattle housing are rosy, given the many indicators for future population growth. Our regional economy is expected to grow substantially thanks in part to massive infrastructure projects like the state Route 99 tunnel, the seawall, the waterfront, and expanding regional light-rail networks that will better link Seattle to other regional ports.

The debate over rent-versus-own and the ability to sustain current market strength is a hot one, but here are five out-of-the-box reasons why the Seattle apartment market will continue to outperform in the foreseeable future:

There are many reasons that Seattle is such a draw for young, smart talent, perhaps the most salient is that Seattle has a “frontier mentality” in its very DNA. Ever since the days of Doc Maynard, this city has embraced and celebrated renegades and wild ideas.

Smart, energetic creative-class types that are seeking open minds without the old-school dogma, often find it here in Rain City. In national polls, Seattle is most often at the top of the ticket for being one of the coolest and most preferred destinations for young technology-types, particularly those looking for a place to grow.

Seattle’s ability to attract smart and inventive young people to companies like Amazon that have committed to downtown campuses is huge, particularly since Amazon pays a stipend for those who live in the city and walk to work.

2. A city that embraces reinvention

Seattle is a city with a fire in its belly and a mission to help reinvent commerce, communication, medicine, and the veritable social fabric of our future. Seattle is the Silicon Forest and, according to Geek Wire, it ranks fourth as a global startup hub, even beating out New York City. 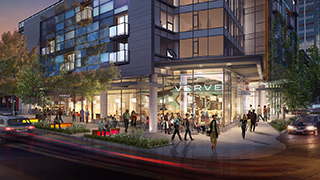 [enlarge]
The tower's design appeals to tech-savvy and international workers.

Smart yet unconventional, this city is one great stew-pot of imagination and innovation, combined with a bit of irreverence and rebellion. Beyond local technology powerhouses like Amazon and Microsoft, this town is also full of science ranging from Immunex to the Gates Foundation.

Seattle’s nurturing community of angel investors and venture capitalists — many of them wealthy, retired technology types themselves — help to fund thousands of emerging technology and biotechnology startups, which further contribute to the job creation and growth that fuels the fire of apartment development.

Bernard-Henri Levy wrote in The Atlantic magazine: “I liked absolutely everything about Seattle. If I had to choose an American city to live in — if I had to pick a place, and only one, where I had the feeling in America of rediscovering my lost bearings — it would be here, in Seattle.”

For those of us that call this place home, we understand. In spite of the weather, this is heaven on earth when the sun comes out to play. Seattle’s very mild climate makes boating, kayaking, fishing, whale watching, mountain climbing, camping and hiking possible year-round.

City dwellers have access to 12 in-city beaches, 50 parks, the Seattle Aquarium, Olympic Sculpture Park, Seattle Center, Pacific Science Center, and within an hour’s drive: more mountain ranges, valleys, lakes and fiords than one could enjoy in a lifetime.

The natural beauty of this corner of the world not only seduces, it is also what entices brilliant minds to stay here and start their new ventures.

One of the most entrepreneurial, innovative and efficient companies in the world, Seattle-based Amazon can sell anything, to anyone, anytime, anywhere on the planet. The online giant sold $16.1 billion worth of goods in the last year, and it commands almost 9 percent of total retail sales in the United States.

The big story, however, is the largely untapped international market, where sales are growing exponentially. Hiring at Amazon has been frenetic, and the company is rushing to expand its downtown Seattle campus, which already includes seven office towers. The new south campus bodes especially well for the short- and long-term future of Seattle’s urban center housing prospects, as it will contain three 1 million-square-foot towers on three full blocks.

There do not seem to be any limits to this company’s business model. But the story only begins there, because the company is a veritable incubator, spawning many entrepreneurial partners that also help to create jobs.

One of the newest residential towers that is best positioned to capitalize on these prospective Amazonian renters is the 2030 Eighth Ave. project, to be located across the street from phase one of the new campus. Developed by Boston-based GID, the 440-foot-tall slender tower with 355 apartments is designed to appeal to a technology-savvy and international workforce.

It is a safe bet that stellar residential projects like these will attract more techies to the Seattle city center, as it continues to become more vibrant and pedestrian friendly.

5. New products for a new generation

Gen Y will be the most influential generation to impact housing since the baby boomers came back from World War II.

Here are some actual quotes from Gen Y renters:

• “I love the mobility that renting allows me.”

• “I cannot put a price on the value of not having to think about things like property taxes, insurance, plumbing, yard work, maintenance, winterizing, unexpected costs … not having to worry about those things gives me a lot more time to enjoy my day.”

• “For me, any potential economic benefit that could be derived from home ownership is negated by the stress that would accompany it.”

Clearly, many, if not most of these new kids on the block do not hold the same values as their predecessors. New residential products that have not yet been conceived will need to be thoughtfully invented to serve the lifestyles of this emerging population. These young techies prefer to be nimble, mobile and flexible, and they have little interest in becoming slaves to cars and homes.

Perhaps when this generation starts to build their families, and when they will realize that renting does not build equity, their priorities will change. For now, many of them have already made a lifestyle choice that favors in-city apartment living, and Seattle is uniquely positioned to fully capitalize on this trend.

Blaine Weber, AIA, is an evangelist for in city living. He is also an architect and founding partner of Weber Thompson, where he directs the High-Rise Design Studio. Weber Thompson is a diverse West Coast design firm specializing in architectural, interior design and landscape architectural services for residential, hospitality and commercial projects.