Breaking the residential logjam at Northgate

Last month Wallace Properties broke ground on 525 Northgate, the second phase of a sustainable mixed-use development in the Northgate Urban Center. Its completion in 2015 will mark a decade of the company’s investment in the area and, combined with the first phase, will provide 426 apartments and 80,000 square feet of retail to the area.

South of Northgate Mall, Thornton Place and Aljoya opened in 2009 with a combined 530 residential units.

Together these projects comprise more than 80 percent of the residential growth in Northgate since the adoption of the Growth Management Act in 1990.

Why has nearly all of the growth in Northgate occurred in the last three years? In a word: collaboration.

In the 15 years between 1994 and 2008, Northgate produced an average of just 13 residential units per year. In 1994, the city adopted a comprehensive plan calling for Northgate’s transformation from an “underutilized, auto-oriented office/retail area into a vital, mixed-use center of concentrated development surrounded by healthy single-family neighborhoods.” 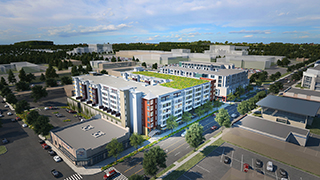 Rendering by Studio 216 [enlarge]
Wallace Properties is building 525 Northgate. When finished in 2015, it will have 266 apartments and 24,600 square feet of retail.

In 1989, a city report projected “dramatic growth” in the area. But nothing happened.

Zoning and regulatory constraints, a lack of infrastructure investment and a bitter fight between environmentalists and the owners of Northgate Mall over the daylighting of Thornton Creek stymied growth in Northgate for more than a decade.

After 10 years and only 170 homes, it was clear that simply adopting a comprehensive plan was not sufficient. Government constraints held back the growth, and city leadership was required to break the logjam if growth was to move forward.

In 2003, city leaders and staff rolled up their sleeves and embarked on a five-year mission to do what was necessary to lay the foundation for neighborhood enhancement and growth in Northgate.

First, the city formed the Northgate Stakeholders Committee, a 22-member group comprised of neighborhood, business, environmental and public sector leaders that provided recommendations to the city on advisable transportation and land-use plan changes for Northgate — most importantly the plans for daylighting Thornton Creek.

From this committee, important community buy-in was achieved on some very difficult decisions. Over a two-year period, the disparate interests on this committee found common ground, collaborated, and created solutions that will benefit Northgate for generations.

Next, the city improved its land-use and transportation plans, and then executed on the plans.

• Completed studies for a rezone of the parcels along Northgate Way to heights of up to 125 feet.

• Updated design standards for the construction of new buildings to encourage better walkability and sustainability in design.

• Funded and constructed road, sidewalk and streetscape projects to improve mobility, pedestrian safety and the aesthetics of the area.

• Completed the Northgate Community Center and Library, turning an old Goodyear Tire store into a public gathering space — a place-making investment for the area.

• Added Hubbard Homestead Park and the Maple Leaf Community Garden, moving Northgate from a place to work to a place to live, work and play.

• Provided public art at various locations throughout the area, enhancing the vibrancy and visual interest of the center.

From these efforts, a foundation was laid that enabled the private sector to take the baton and complete the “vibrant, mixed-use center” that was envisioned in 1994.

In the six years to follow completion of these projects between 2009 and 2014, Northgate will grow by an average of 167 units per year. The new buildings will have first-class amenities, be environmentally friendly (525 Northgate is targeting LEED silver), and have market rents that are affordable to families earning less than a median income.

If the pace of growth continues, Northgate will achieve its 2,500-unit comprehensive plan growth target by 2022; just one year after the $2.1 billion Northgate Link extension project is completed.

Recent efforts indicate that the city and the region remain fully committed to continuing Northgate’s renaissance. Just in the last 12 months, Seattle:

• Completed a transit-oriented development urban design study to guide future growth near the light-rail station, south of the Northgate Mall.

• Reached a 50-50 partnership with Sound Transit to fund $10 million in pedestrian and bike improvements as partial mitigation of the upcoming light-rail station.

There are threats that lurk on the horizon such as the potential elimination of Seattle’s multifamily property tax exemption, or further increases in the county sewer capacity charge, either of which could bring development of workforce housing to a standstill.

Failure to continue to invest in the CTIP projects and address the traffic impact from the future light-rail station would also hinder growth.

That said, over the last decade, Seattle’s leadership in Northgate has been exemplary and provides a textbook example of the public, private and community collaboration and investment that is necessary to turn an underutilized, auto-oriented office-retail area into the environmentally friendly, transit-oriented, mixed-use urban center Northgate is on the path to become. Wallace Properties is proud to play a small part in that endeavor.

Kevin Wallace is president and chief operating officer of Wallace Properties, a commercial real estate investment, development, brokerage and property management firm based in Bellevue. He serves on the Bellevue City Council and is active in business and civic affairs in both Seattle and Bellevue.