Tolling. Not something that excites the average commuter, but necessary for relieving traffic congestion, accommodating regional growth and providing for a safe, reliable trip.

Tasked with selling 90,000 toll transponders before the launch of the newly tolled state Route 520 bridge, which connects communities east of Lake Washington to Seattle, Denise Walz and her team at PRR recognized the need for innovative methods to make behavior change easy on the consumer.

More than 190,000 people travel across the SR 520 corridor daily. Introducing tolling on this existing bridge was needed to reduce traffic congestion and generate revenue to help build a larger, safer and more reliable bridge.

But let’s be real: Nobody wants to pay to cross a bridge they’ve been using for free for decades. Nevertheless, tolling was poised to become the new normal. So, the challenge shifted to how to make it as painless on the bridge user as possible, while also making it affordable to the state to build and maintain. Enter from stage left: All-electronic tolling, or tolling with absolutely no toll booths. 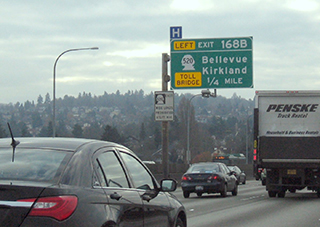 With all-electronic tolling, each vehicle is tolled through either the use of a pass (fully automated) or through the use of license plate imaging (sometimes automated, sometimes reviewed multiple times by human eyes to ensure accuracy, but always requiring a second step of communicating with the Department of Licensing to obtain addresses associated with those vehicles). Because the passes would prove the most affordable option for the state, pass holders would receive a lower rate to cross the bridge.

Enter from stage right: The marketing goal to sell 90,000 passes before the launch of the newly tolled bridge. To tackle this goal, the Washington State Department of Transportation enlisted Walz and her team at PRR, a small downtown Seattle communications firm.

Traditionally, WSDOT sold passes at its customer service centers. In the Seattle area, there was one on each side of the lake. Each facility had room for about four customer service representatives at the counter. Walz and the team at WSDOT immediately saw the challenges with using this method for SR 520 tolling.

“Do the math — you’ve got over 150,000 cars crossing the bridge back and forth every day,” said Walz. “Most people are procrastinators at heart. They are going to wait until the very last few days to purchase their pass. And, if they only have two addresses from which to pick up a pass, there will be lines around the block at each of those locations.

“If you estimate that the eight representatives will need 15 minutes per account set up, you can only get through a fraction of a percent of the total sales you need to achieve in a single 12-hour day,” she said. “We knew these two locations couldn’t possibly accommodate everyone, especially the last-minute purchasers.”

From the beginning, Walz had the idea of retail partnerships. The average person makes 2.5 trips to the grocery store each week — why not reach our audience where they already shop?

With careful review of a map showing which neighborhoods most used the bridge, and which of those areas were underserved, PRR and WSDOT targeted Safeway as their pilot partner for selling Good To Go passes.

PRR developed the pilot program and pitched it to Safeway, who agreed to be the exclusive partner.

“Safeway was an amazing partner,” said WSDOT toll communications lead Patty Michaud. “And, because of our success with them, we then expanded the program to engage other retailers like QFC, Fred Meyer, Costco and Walgreens.”

By the time tolling began in late December 2011, 170,000 passes had been sold, exceeding the goal of selling 90,000 passes by more than 47 percent. Today, Washingtonians have a stable, statewide toll system that successfully processes more than 3 million transactions a month, and SR 520 commuters enjoy a shorter, more reliable trip.

“The drumbeat of tolling as a transportation funding solution is beating steadily across the country, and the model we established with the strategic partnerships program is already serving our other clients well,” said Walz, in reference to new work the agency is doing in Norfolk, Va., with the Elizabeth River Crossings Tunnels project.

“Sometimes a little simple math can lead to a lot of problem solving.”

Mike Rosen is managing principal of PRR, a communications firm headquartered in Seattle with offices in Washington, D.C., Norfolk, Va., and Austin, Texas. He pioneered many of the approaches used in market transformation, social marketing and behavior modification programs.