As the average number of miles driven by Americans heads into its eighth year of decline, a new report from U.S. PIRG Education Fund finds that the slowdown in driving is likely to continue.

Major demographic shifts are likely to depress driving levels for decades, according to the report, “A New Direction: Our Changing Relationship with Driving and the Implications for America’s Future.”

“The trends highlighted by this report have significant implications for the Puget Sound area,” said Rob Johnson, executive director of Transportation Choices Coalition. “It’s crucial that Washington’s leaders right-size our plans and projects to ensure that we don’t build projects for tomorrow based on assumptions from yesterday.”

“The driving boom is over,” said Phineas Baxandall, senior analyst at the U.S. PIRG Education Fund and co-author of the report. “The constant increases we saw in driving before 2005 are unlikely to return. And if millennials’ tendency to drive less becomes the norm as they age, the reduction in driving will be even larger.”

Miles driven per capita peaked in 2004. The average American currently drives no more miles than at the end of President Clinton’s first term. The millennial generation is leading the change in transportation trends. Those 16 to 34 drove 23 percent fewer miles on average in 2009 than in 2001 — a greater decline in driving than any other age group. In addition, millennials are more likely to want to live in walkable neighborhoods and are more open to non-driving forms of transportation than older Americans. 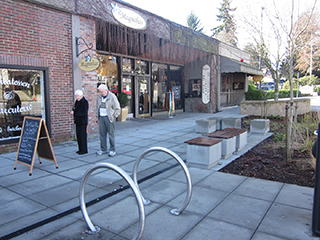 Photo courtesy of SvR Design [enlarge]
This street in the city of Bainbridge Island has amenities for walkers and bikers.

The report finds that under any reasonable scenario, the number of miles driven annually will be far fewer in the future than if baby boom trends had continued. The driving boom during the second half of the 20th century was fueled by low gas prices, rapid suburbanization, and an ever-increasing number of women commuters entering the workforce.

“The shift away from the car is part of a new way of life being embraced by our younger citizens who are leading the trend away from driving,” said Hilary Franz, executive director of Futurewise. “Effective management of our limited government dollars requires our local planners, leaders and our representatives in Congress to recognize this dramatic change and begin shaping our communities and focusing funding on the type of infrastructure needed to meet this new demand.”

The report examines a number of high-profile official transportation forecasts and finds a consistent pattern of overestimating how much Americans will drive, and then only partially revising those forecasts when they turn out to be incorrect. The government forecasts examined all seem to be based on the assumption that the driving boom will last forever, and all fall above even the most conservative scenarios forecast in the report.

Changes in driving habits will affect the amount of revenue collected for transportation, whether through tolls or from the gas tax. Coupled with improvements in fuel efficiency, reduced driving means Americans will use about half as much gasoline and other fuels in 2040 than they use today, making the real value of gas taxes fall as much as 74 percent. Gas taxes provide the chief source of federal and state transportation funds.

“These trends make it clear that, as a nation, we need to take a hard look at our transportation programs, whether we are building what we need for the rest of this century, what we ought to build instead and how to pay for it,” said James Corless, director of Transportation for America.

“In Washington, we need a new funding model to fix existing infrastructure and meet the needs of our communities. As we search for new transportation funding solutions in an age when the old gas tax no longer suffices, the solutions we land on must recognize the new reality that Washingtonians are driving less and choosing to live in affordable, walkable communities connected by transit,” said Johnson.

The report can be found at: www.uspirg.org/new-direction-report.

Dolwick is the policy director for Transportation Choices Coalition. She’s a graduate of the University of Washington’s Evans School for Public Administration and a veteran advocate for energy and the environment. Carrie