Placemaking is at the heart of urban infill

In Seattle our neighborhoods run the gamut from high-density downtown living to historic Columbia City to leafy Green Lake. But what they all do, among other things, is create a sense of place and foster social interaction and community.

That is why we love our neighborhoods in Seattle. Each is distinct and its own destination.

During the expansion of suburban sprawl, many of Seattle’s neighborhoods remained sleepy and underdeveloped with very little change. Not true today.

Today, we see urban infill in every neighborhood. Some of the new development is designed as an extension of the community, offering a sense of place, while other projects have an insular and more institutional design.

Personally, I am not a fan of projects that lack a connection to their surroundings. At Mack Urban, we believe that urban infill needs to do more than infill, it needs to “cultivate the in between” — in other words, maintain and expand the connections between buildings, public spaces, local services, infrastructure and the community. 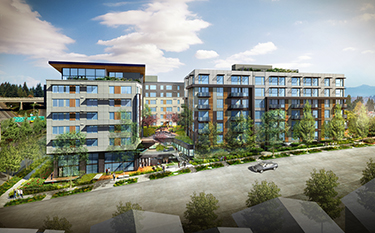 Compact development needs to take on an interdisciplinary approach to truly add value. Development that is insular will never leverage the specific synergies of a site or create that sense of place that we all value. In my 20 years of real estate investment in Portland, Los Angeles and Seattle, I have come to believe that to truly create value for a neighborhood, placemaking needs to be a hands-on tool not just a philosophy or urban design concept.

When I worked with Williams & Dame Development on the early design of Portland’s Pearl District and the master plan for the South Waterfront, we created development codes that unlike traditional zoning are more flexible about land use while being more specific about development formats. By focusing on the formats we could better influence the character and create authentic placemaking qualities. It sounds technical but it’s really very simple.

If you take an interdisciplinary approach you won’t get insular development. That is why the Pearl District feels so connected even though the architecture and uses are as varied as any neighborhood or district. It’s what led to such placemaking qualities as wooden sidewalks and pedestrian alleys. 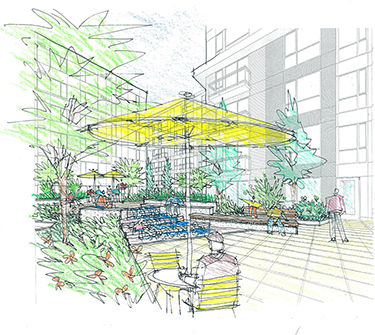 Image courtesy of Hewitt [enlarge]
A courtyard will provide a gathering spot for Eleanor tenants and neighbors.

Wouldn’t those same wooden sidewalks feel authentic in Ballard? That is placemaking. It creates an interdisciplinary approach that connects the past, present and future. It doesn’t have to be a bold statement, it just needs to be authentic.

As developers build more urban infill, the city of Seattle needs to continue to “cultivate the in-between” in order to maintain the unique character of its many neighborhoods.

It’s not hard. In every neighborhood we have aging infrastructure that needs repair or public areas that require restoration. Coordinated infrastructure planning in tandem with new development can help to identify those shared opportunities and break down the typical development silo.

Often projects seem insular because there is nothing to connect them. I’m not advocating that the city transfer costs or the responsibility to private development. Rather, I’m suggesting that neighborhood development works best when the city acts as a coordinated infrastructure planner with a broad vision that can be spread across city departments and individual projects.

Could you imagine if we created form-based development standards in Seattle that graphically spelled out urban performance characteristics, neighborhood by neighborhood? Not just design review that addresses height, bulk and scale but an interdisciplinary approach that leverages the specific synergies of a site combined with that neighborhood’s form and character. 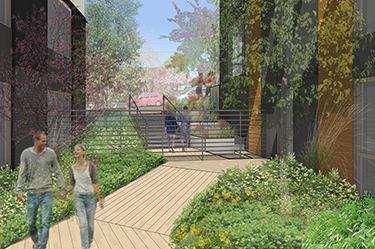 Image courtesy of Runberg Architecture Group [enlarge]
A swale with meandering pedestrian paths at Eleanor will connect one corner of the block to the other.

At Mack Urban, when we approach a potential investment, we don’t start with the “it” (the site). We start with context. And when you focus on context — how the site fits into the place, and connects to the place — you do everything differently. It’s why I still get excited every time we start a new project in Seattle. We get to be part of the ongoing evolution of how a community is relating to its past, present and future.

I would get even more excited if we had the tools to find the intersecting benefits of each project.

For example, our new Roosevelt apartment project called Eleanor will have a swale that intersects the middle of the project and provides a pedestrian connection from one corner of a block to the other.

What if that pedestrian connection was part of a greater switchback or urban trail that is not just privately developed but a public-private partnership? It wouldn’t happen overnight but nothing that promotes placemaking happens overnight.

The Seattle central waterfront is an example of successful efforts toward placemaking. From city planners, local businesses, civic leaders and local activist, thousands have worked together to “cultivate the in-between” along the central waterfront in order to ensure that what prevails is a world class public place that is fully engaged and connected to the neighborhood.

Thinking in terms of new partnerships and synergies, the city is developing a waterfront master plan that will be more than the sum. By broadening the landscape, the city has moved from a code-focused perspective to one that is much more about character and form.

Mack Urban is fortunate to be part of this new synergy with one of our projects at Western Avenue and University Street.

As one of the first new residential projects we will precede much of the waterfront improvements. Therefore we must give careful thought and attention to design cues that the city is developing today. It’s important, as our downtown turns toward Elliott Bay, that we are also thinking about how our project, given its location, completes Harbor Steps along University and connects pedestrians to the pier.

We see our project as much more than apartment homes. It is an “in-between” connection linking downtown to the waterfront and will have a placemaking role in promoting pedestrian interaction through its urban form.

At the end of the day, placemaking is all about the leveraged opportunities that urban infill can bring, as long as it is more than simply infill.