Rent hikes ripple to the suburbs

The Seattle apartment market is a constant conversation topic as development continues to flourish in core urban areas and rent increases continue. Take a deeper look, however, and there are some surprises worthy of discussion.

Of particular interest is that rapid growth in rental rates is not limited to close-in markets. In fact, there are many suburban areas currently outperforming their urban counterparts.

When we look at King County, there are several sub-markets where average rents over the past year have grown at double-digit rates. However, these high-performing markets are not necessarily in areas where one would expect to see such rapid rent appreciation, and include sub-markets such as Magnolia, University District and Issaquah. 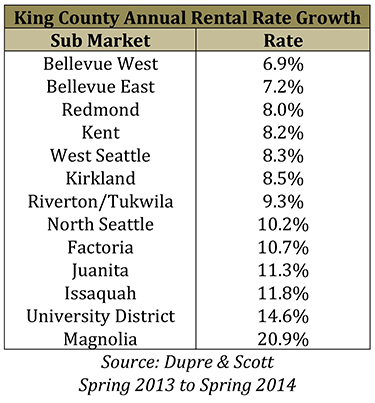 It’s arguable Seattle has reached an inflection point where rents cannot continue to rise at this rate, if for no other reason than income growth is not matching rental rate growth — a clear sign that rents will stabilize (but don’t expect them to go down).

Markets are not linear, rather they tend to move in somewhat predictable cycles. Because the market is currently focused on development in urban core areas, these areas are experiencing the greatest employment growth and resultant in-migration. As such, rents have risen exponentially.

A consequence of the rapid rise in urban rental rates is the move by some tenants out of more expensive markets into second-tier markets — such as Ballard, Beacon Hill and Columbia City — which have good access to the primary job centers and rent at a relative discount. In turn, increasing demand has allowed rental rate growth in these subordinate markets to increase exponentially.

Watch for continued rent growth in markets that include the Rainier Valley, Burien, North Seattle, Kirkland and Juanita.

Over the next 12-24 months, reinvigorated suburban markets will begin attracting increased investment from the development community, as yields start improving and this, in turn, will slow development in the urban areas and allow a return to equilibrium.

That said, the fact that these areas are seeing rent growth at a faster rate than the urban markets of downtown Seattle or Bellevue does give one pause for thought.

A question to ponder in the months ahead: Can we attribute at least some of this growth to the fact that many of these sub-markets now or in the future benefit from good access to mass transit? There may be some reasonable causality here.

The rapid expansion of apartment stock in the central city market areas and their corresponding expectations for rental rates could already be influencing tenants to choose to live a little farther out where rents are not quite as high and this has, in turn, translated into faster growth in rents in these more outlying neighborhoods.

Is this a sustainable trend? Only time will tell, but there are several apartment developers who have started to explore opportunities outside the downtown core for future projects and, given typical time frames, it might be an astute move!