With the recent trend of declining home ownership rates and changing consumer preferences, more people are looking at apartments as a lifestyle choice rather than an economic choice. Today, nearly 35 million Americans call apartments “home,” with more moving into apartments at a faster pace than in recent years.

Changes in household formation are influencing demand for rental housing. In 1955, married couples with children made up 44 percent of all households. Today they constitute just 20 percent, and that number continues to fall. In this decade, renters could make up 7 million new households — that’s half of all new households. Home ownership rates have fallen to numbers not seen since the mid-1990s.

Two large demographic shifts are affecting the local and national housing market: Echo boomers and the millennial generation are moving into the rental housing market at unprecedented rates, and the population of people turning age 65 is growing rapidly. 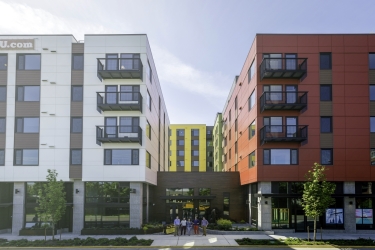 [enlarge]
True North was 58 percent leased before it opened in May. 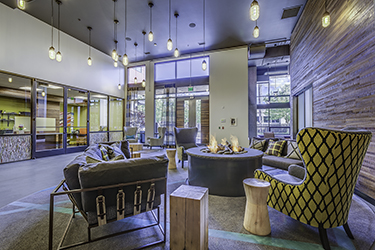 Photos by Hero Creative [enlarge]
True North, a 286-unit apartment at 801 Dexter Ave. N., is one of the many projects adding 10,000 apartments to Seattle this year.

Younger people like the convenience and flexibility of renting, particularly in urban areas, as they join an ever mobile workforce. Baby boomers, empty-nesters and near-retirees continue to downsize their housing from the large homes purchased in the past to more manageable sized apartments or condominiums. Both age dynamics support new apartment household formation.

We are fortunate to live in an area with an extremely diverse economy that is attractive to out-of-state transplants seeking exceptional business opportunities and cherished recreational lifestyles. That has helped create an apartment construction boom rarely seen in the Seattle market.

With thousands of new units already delivered, new construction is approaching record rates, with nearly 10,000 units forecasted to come to market in 2014 and an additional 14,000 units set for completion in 2015.

Average rents continue to rise in the Puget Sound region, but in large part due to the impact of new construction.

New construction has been primarily higher-end, market-rate product in urban areas. These properties are leasing up at rates higher than the current average market rent, thereby increasing the average of all property rents. The influx of new construction will certainly have an impact upon rent growth, occupancies and concessions in the short term, starting next year.

However, in-migration figures for Washington state and King County are well above average. Apartment demand continues to outpace supply. Job growth continues to be steady, allowing for strong absorption numbers.

If job creation and in-migration continue to be strong, the impact all the new apartment construction will have on the existing market will be tempered, and strong regional supply-and-demand factors will prevail in 2017 and beyond.

Seattle and the Puget Sound region are a hotbed of construction activity and investment interest spurred by outstanding rent growth and solid demographic and employment factors.

Apartment sales are also approaching a near record pace. According to research conducted by Mike Scott of Dupre + Scott Apartment Advisors, the average price per unit for properties built before 2000 was $135,000. Properties built in the past five years sold for more than twice that amount, averaging $288,000 a unit, with average cap rates under 5 percent for these newer construction sales.

With rent increases exceeding 6 percent in many markets, vacancy loss under 4.5 percent, and rental concessions under 1 percent of scheduled gross income, it’s no wonder the Pacific Northwest has been looked at by national institutional investors as one of the hottest and most desirable markets in the country.

Shout it from the ever-increasing rooftops: The apartment industry’s robust economic engine drove a $1 trillion contribution to the national economy in 2011, according to an economic impact study conducted by Stephen Fuller of George Mason University’s Center for Regional Analysis.

With housing finance reform, tax reform and immigration reform as political hot buttons in our nation’s capitol, the Washington Multi-Family Housing Association, through our affiliation with the National Apartment Association, continues to educate our national lawmakers so they better understand the value of a thriving apartment market to local, regional and state economic growth, as well as to the needs of residents who call apartments home.

Jim Wiard is executive director of the Washington Multi-Family Housing Association, a nonprofit serving the multifamily real estate sector. WMFHA is the Washington state affiliate of the National Apartment Association, and has nearly 1,000 members with 125,000 rental units under management.