We need housing -- and jobs -- near transit stations

By DAN BERTOLET
Via Architecture

It is widely established that concentrating growth near transit is a key strategy for sustainable urban development. Historically, planning for transit station areas has focused on housing rather than employment — when most people think of transit-oriented development, they picture dwellings above street-level retail.

In recent years, however, the value of planning for employment around transit has become increasingly recognized for several reasons. From a practical standpoint, jobs near transit boost ridership and help leverage transit investments. But more importantly, creating a healthy balance between employment and housing is essential for growing a complete community that maximizes opportunities for both residents and workers.

In some station areas the primary need is for new employment that builds upon the assets of the existing community and becomes a source of living-wage jobs for locals. In other cases, the main challenge is to avoid displacement of existing businesses. Industrial jobs are particularly challenging since they can conflict with residential uses, and often rely on the availability of cheap land.

Planning for employment around transit also has the potential to stimulate the creation of innovation districts that capitalize on the co-location of intellectual capital and production resources. High-quality transit access is an increasingly important ingredient for attracting the essential entrepreneurial talent.

Image by Via Architecture [enlarge]
Employment-based redevelopment near the Rainier Beach light-rail station would create an ideal location for a farmer’s market.

Of course the catch is that there’s no easy formula for bringing high-quality jobs to desired locations. Do innovation districts just happen, or can the public sector help them along? Via Architecture recently engaged in two employment-based planning efforts that illustrate concepts and approaches, as described below.

Seattle’s southernmost Link light-rail station is in Rainier Beach, a highly diverse, relatively low-income neighborhood. Within a quarter-mile of Rainier Beach station are a handful of small businesses, and the housing is mostly single-family. There has been no significant redevelopment near the station since the trains started running in 2009.

The city recently completed a neighborhood plan that focused on opportunities in the station area. During this process, the community consistently expressed a high priority for redevelopment that creates high-quality employment that can improve economic mobility for residents, such as low-impact production, light-industrial, food-processing, education and incubator businesses.

To address this goal on the regulatory side, the city is developing new zoning that will incentivize educational, industrial and innovative commercial uses while promoting a vibrant, sustainable and walkable urban environment. Proposed zoning includes floor area or height bonuses for projects with the employment uses noted above, first-floor minimum height requirements for flexible accommodation of commercial uses and special allowances for loading.

Image by Via Architecture [enlarge]
Full build-out of the Rainier Beach light-rail station area would create a balance of businesses and housing.

With easy access to the industrial corridor that extends south from the Duwamish, Interstate 5, Sea-Tac Airport and downtown Seattle via light rail, as well as relatively low land costs, Rainier Beach is well situated for many types of innovative business pursuits. However, stakeholders also recognized the need to start with a specific sector that could leverage existing community assets for competitive advantage over surrounding areas, and the idea of a food innovation district rose to the top.

Rainier Beach is home to Seattle’s largest urban farm, and its diverse population provides a wealth of ethnic food knowledge. These assets provide a unique opportunity to leverage its light-industrial zone to become a hub of food and agricultural production, combining educational and training facilities with processing and distribution.

The city convened a workshop to gather input from potential partners and users of such a facility, including Seattle Tilth, the Emergency Feeding Program, Rainier Valley Food Bank, Project Feast and Fare Start, as well as the Seattle community colleges, Renton Technical College and Bainbridge Graduate Institute.

Input from the workshop led to a prototype building design. Unfortunately, the Rainier Beach station area lacks any existing building stock suitable to be adapted for the center, so new construction will be required.

The next steps to implementing the center involve establishing partners, developing a business plan and space programming, securing a site and financing, construction, and lastly, operating the facility. 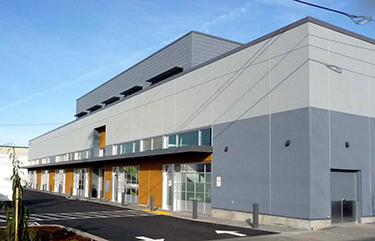 The Portland-Milwaukie light-rail extension, due to open in 2015, will have two stations in Southeast Portland’s Central Eastside, one of the city’s most important and dynamic industrial and employment centers. To address this unique environment, the city and its consultant team have been developing a new model for station area planning known as employment transit-oriented development, or ETOD.

The overall goal of the city’s ETOD approach is to strategically intensify and diversify the range of commercial uses on industrial lands, with the primary intent of increasing jobs, but also to leverage transit investments. At the same time, the city is intent on controlling land speculation, since high costs tend to push out many of the desired businesses. While there is already streetcar service in the Central Eastside, it is not another Pearl District, nor does the city want it to be.

A key strategy will be to reduce conflicts between the Central Eastside’s long-established businesses such as lumber and mill works, a dairy, and boat repair, while also welcoming an increasing number of new small, nimble technology and production companies that value a close-in location. These “makers” are seen as an important next generation of commercial enterprise whose employees are likely to bike commute and patronize the small-scale restaurants, bars and lunch spots that have begun to populate the area.

Another important piece of the ETOD puzzle is an intensification of land use in buildings that blend industrial and production uses on the ground floor with flexible office spaces on multiple floors above. The goal is buildings that can provide a delicate balance between a diversity of new businesses, and an industrial core of users that rely on lower land values to stay in business.

This configuration is already beginning to emerge in the Central Eastside, and one of the best examples is the newly constructed Pitman Building, with 11,000 square feet of space for six production kitchens on the first floor and 3,000 square feet of office space on the second floor. The area’s supply of historic buildings is also an asset, as exemplified in the recently renovated Ford Building, a former Model T assembly plant that now houses office, retail, artist studios, and a variety of small, creative businesses.

The role of partnerships

Lastly, partnerships between large institutions and the private sector are an essential ingredient for catalyzing true innovation districts. With the goal of creating an environment suitable for 21st century industry and providing meaningful occupation, many cities are establishing collaborations with universities that have a technical research and innovation focus.

For example, New York City has established a collaboration with Cornell, Teknion (an Israeli technical university) and Google. In Portland, there is a huge opportunity to tap into the synergies between the Oregon Museum of Science and Industry, Oregon Health & Science University, Portland State University, the burgeoning “makers” industry, and/or a corporate giant such as Nike.

The Oregon Museum of Science and Industry owns significant riverfront property adjacent to future light rail, and has great potential to leverage its location at a regional transit gateway and bring culture and complementary employment to the Central Eastside. In this case, the most advantageous outcome may be a new large tenant that would both benefit from and contribute to new synergies with existing business clusters.

Dan Bertolet is an urban planner with Via Architecture and writes on urbanism at Citytank.org.