Cranes are once again dotting downtown Seattle’s skyline, major companies with worldwide brands are setting up shop and downtown employment is at its highest level in more than a decade.

Strong employment growth in Seattle’s urban core is providing economic opportunity and also increasing demand for housing across Seattle. Tens of thousands of housing units have been created in Seattle over the last 20 years, but today Seattle lacks a comprehensive plan to maintain affordability and the production of market-rate units.

There’s a large metropolitan city 809 miles to the south that serves as a cautionary tale for what can happen when a city’s employment base increases with no plan in place to maintain market-rate and affordable housing production.

San Francisco is a wonderful city, with many qualities worth emulating: its housing situation isn’t one of them. Housing supply didn’t maintain pace with demand, and there was down-zoning and a planning process that shut out density. San Francisco is now trying to play catch up by encouraging new housing, but it may be too late. The average rent in San Francisco is $3,000 a month and the median home price has hit $1 million. 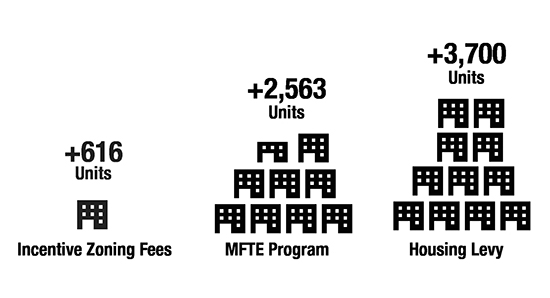 
Seattle cannot follow this path, but it’s one we’re sliding toward if we don’t develop a comprehensive housing strategy. Today, Seattle has a collection of housing programs, but lacks a citywide plan to produce market-rate and affordable units to keep pace with strong job growth. The city’s current incentive zoning program is not the solution to this problem; the status quo is simply not adding enough affordable housing.

Incentive zoning allows a developer to build above the base height limit, as long as the developer either includes affordable housing as part of their project, or contributes approximately $22 per gross square foot to the city to fund new affordable housing.

An incentive zoning fact sheet, at http://tinyurl.com/SeattleZoning, prepared by the Downtown Seattle Association illustrates the program’s shortcomings. Given the existing costs and risks to building to maximum density, 62 percent of the projects eligible for the program have opted not to use it and were built to the base zoning, according to the report.

South Lake Union has been a hotbed of development the last few years. Yet, just five of 18 residential projects in South Lake Union plan to use incentive zoning. This is a missed opportunity.

Some of the lost benefits: 5,200 construction jobs not created; $74 million in sales tax revenue not collected; $100.8 million in property tax not collected; 3,811 residential units not built; $10.3 million in transferrable development rights not purchased; and $49.5 million not contributed to affordable housing and day-care programs.

Additionally, in the last 12 years this program has produced the equivalent of just 616 units of affordable housing, while 46,000 new units were developed city-wide in that same time period.

There are many other options worth examining and more productive tools we can use to build market-rate and affordable housing.

The city’s Multifamily Property Tax Exemption program provides a tax exemption on the residential improvements on multifamily projects in exchange for setting aside 20 percent of the housing units for moderate-wage workers. That program produced more than 2,500 units in the last 12 years, the same period in which incentive zoning led to a little more than 600 units.

The MFTE program is clearly more effective than the current incentive plan. The city should explore expanding this program.

Other cities are looking at creative ways to address their housing situations by leveraging existing municipal resources and applying them toward a solution. Philadelphia, for example, has a plan to transform city-owned properties into affordable housing.

In New York City, Mayor Bill de Blasio released a comprehensive housing strategy in May that aims to produce 200,000 new affordable housing units over 10 years by leveraging city land and subsidies, preserving affordability of existing housing stock and incentivizing new development. That plan can be viewed at http://tinyurl.com/NYC-HPlan.

Seattle does not yet face the housing challenges of San Francisco, but if we maintain our current course it won’t be long. Seattle needs a robust and comprehensive housing plan.

Mark Barbieri is the 2014-16 Downtown Seattle Association board chair and executive vice president of Washington Holdings.