Prefabricated construction is not new, but it’s gaining prominence as the building industry continues to recognize the need for faster, higher-quality and more sustainable construction.

Prefabricated components can be used in any building sector to save money and time during construction. In urban environments, prefabricated construction is especially beneficial because it allows for greater building density, and makes for a safer and more productive working environment.

Adolfson & Peterson Construction is developing a light-gauge steel-framed wall panel for the multifamily housing, healthcare, student housing and hospitality markets. Thanks to its post-and-beam design, the steel panel system can be installed quickly, efficiently and safely. As a result, owners and developers using this prefabricated system can expect to save up to 15 percent on the construction schedule. 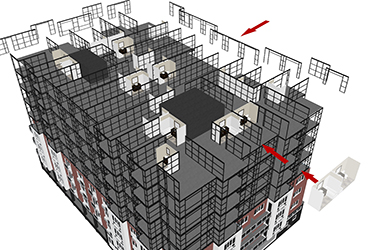 Image courtesy of A&P [enlarge]
Using a prefabricated wall system can save up to 15 percent on the construction schedule.

Many buildings in the Puget Sound area that used prefabricated components experienced similar schedule savings during construction. A&P recently completed the seven-story Box Car Apartments in downtown Seattle, which was built with a similar panel system, as well as prefabricated stairs.

“Each floor was installed in just one week, allowing other trades to quickly access the site,” said Jerry Eubanks, A&P’s vice president of operations. “The prefabricated wall panels saved us nearly 12 percent on our construction schedule.”

Prefabricated steel panels also allow developers and owners to construct a building that would not have otherwise made financial sense. Wood-frame buildings are less expensive than those built from metal or concrete, but in many urban environments, including Seattle, wood-frame structures are limited to five stories. And although concrete buildings don’t face height restrictions, concrete structures under 12 stories are often prohibitively expensive to build.

A&P’s panel system addresses both of these construction realities. Buildings using the panel system can be between six and 20 stories. In addition, the prefabricated panel system is as much as 20 percent less costly than concrete.

Seattle is one of the nation’s fastest growing cities, and prefabrication allows state-of-the-art facilities to be built much more quickly than those using traditional construction methods, ensuring that owners can generate revenue sooner.

Architects are a critical part of this process since they provide important input on design elements and also have the flexibility to specify finishes.

Early selection of prefabricated elements allows production to begin early, and just-in-time delivery of each component ensures that the building site is minimally impacted.

McGraw-Hill reported that as a result of the shorter schedules, 51 percent of contractors saw project budgets decrease by at least 5 percent.

In the area of safety, Paula Eick, national safety director for A&P, notes that, “It’s not uncommon for projects that use prefabricated construction to see significant improvements to safety.”

McGraw-Hill found that 37 percent of contractors experienced site safety benefits when prefabricated components were part of a project.

A&P’s subcontractor partners are also seeing safety improvements since many of their components are manufactured off-site in controlled environments.

With the increasing demand in urban environments for sustainable, high-quality construction, prefabrication allows the building industry to meet these demands in an innovative and efficient way. Prefabrication helps keep workers safe and drives costs down for owners and developers. It addresses many industry issues and will help move the industry forward by introducing new ways of thinking about construction.

John Platon is a senior vice president at Adolfson & Peterson Construction. He has more than 30 years of construction experience, including nearly 20 years of developing prefabricated building systems such as modular bathrooms by Eggrock Modular.