Big users, but no available office space on the Eastside

The Eastside office market is like a big game of musical chairs. Tenants are scrambling to look for office space, with diminishing options for them to consider.

Driven mainly by large tenants looking for space, there are simply not enough options from which to choose, nor is there a place for everyone to land. Much like a game of musical chairs, it’s getting to the point where some office tenants will end up without a “chair” in this current game.

Vacancy rates for the entire Eastside sit at 8.6 percent, a 10-year low and roughly half of where it was in the middle of the latest recession (16.2 percent). With seemingly no end in sight to the steady demand in the ever-tightening Eastside office market, that number is projected to drop to 7 percent by year end, and down to 6 percent by the end of 2019.

The numbers are even more dire for tenants considering highly desirable downtown Bellevue, where Broderick Group vacancy projections are 4.1 percent for year-end 2018 and 2.3 percent for year-end 2019. In addition to that, asking rates are at a 10-year high of $36 per square foot annually (inclusive of operating expenses) for the entire Eastside and projected to grow significantly over the next two years before enough supply can be delivered. 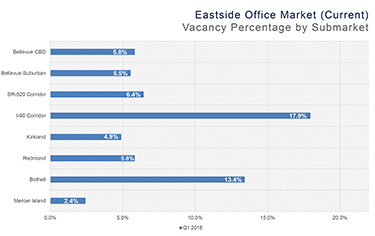 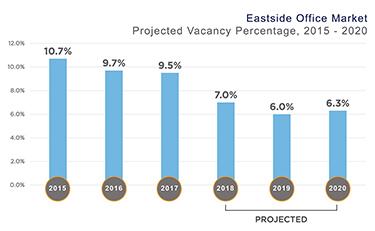 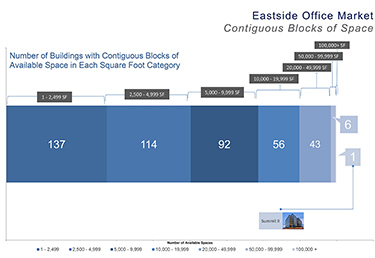 Perhaps the best indicator of the strength of the current market lies in the fact that nearly every submarket on the Eastside has experienced growth over the past few years. Of the eight submarkets that make up the Eastside, only the I-90 Corridor has had negative net absorption in 2018. That absorption is generally attributed to Boeing giving back several large blocks of space that it previously leased or owned.

The strongest submarkets have been the Bellevue CBD, Kirkland and Redmond.

The Bellevue CBD has been the bell cow for the Eastside in recent years. It was responsible for over 70 percent of positive net absorption throughout the entire market in 2017.

Kirkland is the tightest submarket, with a vacancy rate of 4.9 percent.

Redmond has been the hottest market in 2018, with a positive net absorption of over 350,000 square feet so far (nearly double the amount of positive absorption when compared to the next closest market).

The Eastside has had the good fortune of calling some of the best companies in the world “homegrown.” Those firms played a vital role in making the market what it is today. However, while the market has experienced organic growth, the rise of the Eastside in the current cycle is largely due to the growing presence of technology companies whose roots stem from other parts of the country, or world.

Since the beginning of 2017, the Eastside has absorbed roughly 1.7 million square feet of space. In those 18 months, more square footage has been leased than in the prior three years combined.

Over 60 percent of the absorption since the beginning of 2017 came from companies in the technology sector. On top of that, tech was responsible for approximately 65 percent of all new leases over 50,000 square feet. Many of those leases are from companies that had small or non-existent offices in the region prior to 2016.

Will the pendulum swing?

With virtually no new office buildings under construction on the Eastside, excess supply in the short-term will not be the cause of any potential downturn. The first two phases of Kirkland Urban, totaling nearly 400,000 square feet, are set to deliver later this year. That would have brought some relief to the market, but the project is fully committed.

After that, there are no projects ready to go as developers simply under estimated the strength and length of this cycle.

There are approximately 13 potential sites, all in downtown Bellevue, which can deliver approximately 7.5 million square feet of office space. While most of those sites are currently "proposed," it does beg the question: Which will be the next to move forward?

The overriding issue with downtown Bellevue high-rises is time to market, which is approximately four years — providing no relief in the short term. Additionally, with the success of residential in downtown Bellevue, many of the sites will instead be slated for housing.

Another factor that could lead to a slowdown in the market is the amount of sublease space that is available.

Space available for sublease accounts for 1.17 percent of the total inventory in the market, which is just below the average percentage of sublease availability over the last 10 years (1.2 percent).

If several large subleases came available, especially from large users who have been contributing to the recent growth of the market, it could change the trajectory of the market entirely. In addition, several large leases are set to expire in the next 18 to 24 months. If those tenants decide to give back space (not renew their lease), it could add a substantial amount of supply to the market, dampening expectations for the market in the short-term.

The thing about musical chairs is that inevitably the game comes to an end and another one starts, much like the up and down office market cycles of the past. The question for the Eastside is really a matter of what happens first: Does the music stop (i.e. is there an event in the national or local economy that stifles demand) or does someone throw in 10 more chairs (new office projects that increase supply at the wrong time as demand starts to ebb)?

We believe new construction is needed but as always it would be wise for developers to be cautious as we near the end of this strong cycle, and for tenants to recognize that at least for the next two to three years they will have to be creative and flexible to secure the office space needed to accommodate their growing workforces.