The benefits and pitfalls of fast development in King County are not limited to Seattle: Eastside cities including Bellevue, Kirkland, Redmond, Issaquah and others are changing rapidly, too.

And, while the vibrant economic hubs may seem immune to issues facing homeless and low-income populations — after all, these are the cities that boast Microsoft global headquarters, Google Northwest offices, Facebook, Expedia and more — the Eastside is also suffering from a rapidly increasing need for affordable housing.

About 36 percent of all households on the Eastside are considered cost-burdened, defined as paying more than 40 percent of income towards housing. Schoolteachers, first responders, retail workers and administrative staff typically earn less than 80 percent of area median income.

Long considered affluent, many Eastside residents now claim to “not be able to afford their own homes,” meaning their income would not qualify them to buy the home they already live in. 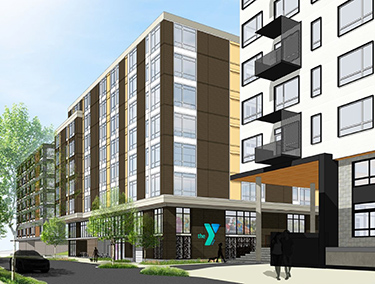 The rule applies throughout the region, and is already driving developments in the Roosevelt and First Hill neighborhoods of Seattle. Housing that is developed with transit is known as transit-oriented development (TOD) and is eligible for special funding awards through a program by King County.

In the next five years, TOD sites in Bellevue, Kirkland and Redmond will go through a request for proposals process for funding awards. The goal is to provide housing near transit at the same time the train stations open for use. The city of Bellevue will develop two major TOD sites along the Bel-Red corridor at the proposed Bel-Red/130th Station and the Operations and Maintenance Facility East. Each of those is slated to provide more than 200 units of affordable housing.

The first of the TOD projects scheduled to start construction on the Eastside is in Redmond at the master planned community of Esterra Park, on the former campus of Group Health on 156th Avenue Northeast. Imagine Housing has been working with the city of Redmond, Capstone Development, Washington State Housing Finance Commission, ARCH, and King County funders to provide 130 permanent affordable apartments to people earning less than 60 percent of the area median income.

The project is unique for its overall design, which includes almost 12,000 square feet for a YMCA Early Childhood Development Center. Other details include a second tower with another 130 apartment units that will be built and managed by a traditional market-rate developer, multiple open spaces, and shared amenities between the two. Households will have access to Bellevue schools, excellent shopping, restaurants, and will be steps away from transit and Microsoft. 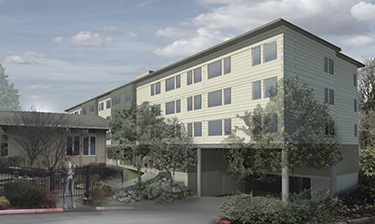 Another project planned on the Eastside includes 255 units at various price points with retail space at the Trailhead in Issaquah, under joint development by King County Housing Authority and Spectrum Development. Also, Downtown Action to Save Housing (DASH) has applied for a permit to redevelop its site in the Glendale neighborhood with 250 units of housing for low-income seniors and families.

Eastside cities recognize that TOD is only one part of the solution and are working hard to find other ways to plan for and provide more affordable housing within their boundaries. For example, in late 2017 Issaquah lifted its moratorium on development and the City Council adopted a housing strategy work plan that includes increasing housing affordability as one of its key goals.

Redmond adopted multifamily property tax exemption regulations in 2017, which have already been applied in 2018 to pave the way to create 210 new affordable apartments. Kirkland has created the Housing Strategy Advisory Group to involve representative stakeholders from throughout the community to help make recommendations for its housing strategy plan.

Affordable developers have gotten creative, working closely with faith-based communities, as well as cities and King County, to identify land that can be rezoned and developed into affordable housing. For example, Imagine Housing is already under construction with its 30Bellevue project, which will provide 63 permanent affordable apartments close to shopping and transit via a unique land deal with St. Luke’s Lutheran Church on Bellevue Way.

Imagine Housing owns and operates 14 affordable housing communities in six Eastside cities: Redmond, Bellevue, Mercer Island, Sammamish, Issaquah and Kirkland. Its goal is to produce 430 more affordable apartments in four to five new communities by the end of 2022, which will roughly double the organization’s size.

Unfortunately, all of this is a drop in the bucket compared to the need. County planners have stated that 244,000 more affordable homes will be needed to meet projected growth by 2040.