When Vulcan Real Estate purchased 6 acres for redevelopment in downtown Bellevue, some people in the commercial real estate industry were surprised. Known for the ongoing redevelopment of 60 acres in South Lake Union and our mixed-use residential projects in the Central Area and at Yesler, Vulcan has focused on urban infill development for nearly 20 years.

We were asked: “Why Bellevue and why now?”

Our research into the Bellevue market revealed that Vulcan’s development philosophy is nicely aligned with Bellevue’s planning and community development guidelines.

Bellevue is focused on neighborhoods, smart growth and cultivating business. Vulcan takes an inclusive, people-first lens, and seeks to develop spaces that facilitate positive human interactions and promote long-term economic growth for everyone. Both approaches aim to create world-class 18/7 neighborhoods that offer a variety of places to live, work and play. These synergies make Bellevue a compelling and attractive place to do business.

A funny thing happened as all eyes where pointed on Seattle as the “fastest growing city in America” — Bellevue quietly transitioned into a vibrant economic center. A partial list of recent major leases in excess of 80,000 square feet to companies such as Amazon, Valve Software, Smartsheet, Pokemon, Salesforce.com and WeWork demonstrate just how desirable downtown Bellevue has become to tech firms. And it continues to appeal to traditional financial, insurance and real estate industries as well.

During this period of strong growth, Bellevue City officials took an inclusive approach, collaborating with investors, developers and employers. After Vulcan’s initial investment in the CBD, city officials arranged a tour for us to see firsthand some of the proposed changes for the city and current and future development projects. We felt very welcomed and were excited by the city’s engagement.

The business of real estate development is inherently risky and expensive, and many factors that impact the success of new projects are out of a developer’s hands. The more a city can do to provide a sense of predictability and collaboration to its legislation and land-use regulations, the more likely developers (and employers) will be to bring economic development, jobs, tax revenue and amenities through new development. 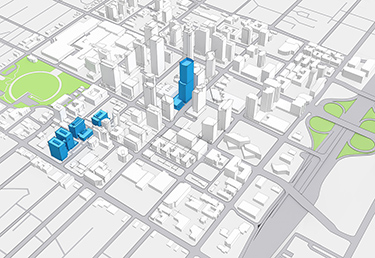 As the number of suitable development sites in Seattle continues to diminish, Bellevue has been working diligently to get its infrastructure and land-use code in order, setting the stage for increased development and density. The recent passage of the Downtown Livability Initiative by the City Council was the first time in more than 30 years that the zoning code was significantly updated.

The upzone greatly improves Vulcan’s ability to develop office space at Bellevue Plaza, by increasing commercial floor area ratio (FAR) from three to five times the site area. Vulcan plans to develop an approximately 1 million-square-foot phased urban office complex at this location, and is taking its other sites through entitlement.

The rezone also encourages taller buildings and Vulcan may elect to develop a single office tower at 555 108th Ave. N.E., which at 38 stories would be Bellevue’s tallest skyscraper. With a development potential of 2 million square feet, Vulcan could become downtown Bellevue’s largest office landlord once its projects are complete.

Anyone who has driven east across I-90 recently has witnessed firsthand that light rail is coming to the Eastside. Anticipated to open in 2023, the East Link will create 10 new stations from Redmond to Seattle, including seven stations in Bellevue. It will give riders a fast, frequent and reliable connection between the Eastside’s biggest population and employment centers and destinations across King, Pierce and Snohomish counties. Easy connections from and to the Bellevue central business district offer large-scale urban office opportunities for growing businesses looking for employee live-work options outside of Seattle.

As research indicates, millennials, who have put off making big life decisions, such as marriage/partnering, having children, buying a house, etc., are now older and have started making those choices. The Brookings Institute declared 2012 as the peak of America’s back to the city movement. And while Seattle continues to attract an influx of new residents, there’s evidence that millennials starting families prefer the close-in urban hubs like Issaquah, Redmond and Bellevue because they offer an abundance of parks and open space and excellent schools.

Another major initiative that Bellevue has undertaken in recent years is the development of the Grand Connection, a transformative plan to connect pedestrians and bicyclists from Meydenbauer Bay Park to the Wilburton commercial area and the Eastside Rail Corridor, creating new opportunities for public space, recreation and the arts.

Long criticized for the size of its blocks, which made walking in downtown prohibitive, the city has proposed the Grand Connection that will connect pedestrians and non-motorized vehicles to important civic and public places including Old Bellevue, Bellevue Downtown Park, the pedestrian corridor, Bellevue Transit Center, and the Civic Center District, providing safe access over Interstate 405.

These types of investments into the city’s public realm will pay dividends for generations to come. That is how Vulcan approaches its philosophy toward development as well. In short, we see great alignment with Bellevue’s inclusive approach to attracting investment — with a collaborative approach that includes the private sector, nonprofits and government. Everyone wins.

Scott Matthews is senior director of acquisitions and residential development for Vulcan Inc. He has more than 30 years of development and management experience in multiple product types.