For decades, the Eastside commercial real estate community has been largely defined by downtown Bellevue, Redmond and a limited number of other area submarkets.

The distinctions are well-earned: As the state’s second largest central business district, Bellevue has a formidable core, with more than 10 million total square feet of commercial office space. And Redmond, after all, is home to Microsoft, which began its tech-office campus development in the mid-1980s, before broadening its footprint later into Bellevue, Seattle and other markets around the world.

Microsoft recently announced a multi-billion-dollar expansion that will bring online some 18 new buildings over the next five to seven years in Redmond, so its reputation as a major part of Seattle’s Eastside market should only continue to grow.

Until recently, Renton, at least in the minds of brokers and large-space users, was part of the region’s “South End” office market. It is home to the Boeing Renton factory, where many of the world’s commercial airline stock, most notably the 737, are proudly assembled. 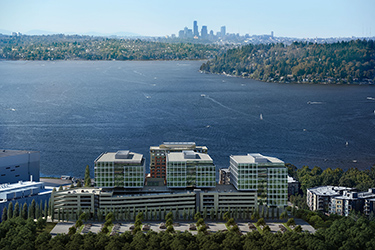 Image from Seco Development [enlarge]
When complete later this year, Southport will have nearly 720,000 square feet of office designed for large tech companies.

In addition to Boeing, Renton has historically been associated with other fine manufacturing corporations, including Paccar, and destination retail such as IKEA and, a few miles away, Westfield Southcenter in Tukwila. And while Renton for years has served thousands of small- and medium-sized businesses through its various low-rise office parks, it symbolically fell outside of the Eastside’s commercial real estate catchment zone.

That’s all changed with the development of the Southport on Lake Washington project.

The multi-phased mixed-use development has been a game-changer for Renton, helping to bring a large contiguous quantity of Class A office to the city. Just a few years ago, this type of commercial-office transformation would have been unimaginable.

The numbers are staggering. When complete later this year, Southport will deliver nearly 720,000 square feet of office designed for large technology users, spread across three nine-story buildings on the southern shores of Lake Washington.

The office development supplements Southport’s existing 383 units of luxury multifamily product completed in 2008, a 347-key four-star Hyatt Regency hotel, and a collection of on-site retail and restaurants that, starting next spring, will include Black Rooster, with an authentic gourmet menu drawing on thousands of years of Chinese cooking culture.

The sheer size of Southport’s office footprint, as well as the type of future user it will serve, has helped to build Renton’s credibility as an Eastside submarket. This project alone will increase by nearly 60 percent the amount of Class A product in Renton which, before Southport, included just over 1.1 million square feet of high-end commercial office, according to market data provided by CBRE.

Furthermore, until now, Renton’s office market has really been dominated by Class B space — nearly 2.5 million square feet of it — featuring lower-end finishes and systems that cater to a different type of company than what’s typically found in downtown Bellevue and Seattle.

To that end, Southport’s office campus will offer buildings with large, efficient floor plates, robust infrastructure and convenient access to luxury amenities both on-site and nearby: the 57-acre Gene Coulon Memorial Beach Park; The Landing, with its 600,000 square feet of entertainment, restaurants and service and retail space; and, of course, Lake Washington, the literal recreational “backyard” for Southport and its tenants.

The combined offerings create a commercial environment that today’s technology companies are actively seeking, whether they’re located in an urban center or just down the road in a viable commercial-office submarket. Having a critical mass of Class A space that’s close to major highways and arterials and surrounded by a wide range of goods and services helps large users to recruit and retain the industry’s best talent.

Not all submarkets the same

Seco’s strategy for Renton is not unlike what was created at Carillon Point in Kirkland which, for nearly a century, served as a dance-hall site for tour boats or a blue-collar Northwest shipyard given its location on Lake Washington. Only when developers, led by the Skinner Corp., created Carillon Point’s mixed-use village with significant room for technology companies and other major users did Kirkland establish itself as a viable Eastside commercial submarket.

But all submarkets are not created equal. While some offer affordability for both commercial tenants and residential homeowners, they sacrifice convenient access to other commercial centers, given their relative long distances from the downtown core. And others are situated closer to central business districts but are prohibitively expensive to users — if a submarket’s lease rates and home prices are similar to Bellevue and Seattle, some users figure they might as well locate their businesses in the core.

The Renton submarket has the best of both scenarios. Just a few miles from downtown, Southport’s commercial-office lease rates are significantly less expensive than Bellevue and other Eastside submarkets. At roughly $38 to $40 per square foot, Southport is as much as 20 percent less than the comparable Class A office space in downtown Bellevue and Seattle.

Single-family homes in Renton cost less, too. Homeowners searching here can expect to spend hundreds of thousands of dollars less than in neighborhoods immediately surrounding Bellevue, with more availability to consider.

Renton’s relative affordability was something that Matthew Gardner, chief economist at Windemere Real Estate, cited in a recent presentation to the Renton Chamber of Commerce. He predicted tech companies will increasingly look to Renton for Class A office space as they continue to be priced out of Seattle, resulting in higher demand for homeownership and apartment rentals for their employees.

It’s not just companies in the tech industry that are finding Renton attractive. Totaling more than 7,800 jobs, the healthcare industry is now the third-largest employer in Renton. The University of Washington Medicine Valley Medical Center has served Renton since 1947, and is ranked one of the Seattle area’s top hospitals. Providence St. Joseph Health, headquartered in Renton, has some 2,500 employees at its 12-acre campus. And, Kaiser Permanente Washington, which has a 29-acre campus in Renton built in two phases in 2016-17 at the former Longacres race track site, employs more than 1,300 local professionals.

As the region’s commercial real estate market continues to thrive, downtowns and their surrounding submarkets will react to meet the demand for space from growing corporations. Nowhere is that growth more apparent than on Seattle’s Eastside, where vacancies are approaching historic lows and companies are expanding and relocating to take advantage of all the economic and lifestyle benefits its communities offer.

One of those Eastside submarkets, Renton, is more than doubling its Class A offering with the creation of Southport on Lake Washington, a development that will position this one-time manufacturing-based community as a market-of-choice for tech companies for decades to come.

Kip Spencer, a 28-year veteran of the commercial real estate industry, is the director of leasing and marketing at Seco Development. Seco has owned land for over 35 years in Seattle, Bellevue, Kirkland and Renton.