When we think of density on the Eastside, many of us think of gleaming towers going up in Bellevue or mixed-use apartments popping up in Redmond and Kirkland.

Though traditional urban centers are all growing during our current boom, a surge of new development is transforming the Eastside’s long-standing low-density commercial and industrial districts. Former strip malls and auto dealerships are giving way to large mixed-use and transit-oriented developments.

Nowhere is this transformation more visible than the Bel-Red Corridor. In anticipation of the upcoming Link light rail, this 900-acre area between Bellevue, Redmond and state Route 520 has been rezoned and is set to explode with growth that could rival Seattle’s South Lake Union. Thousands of new jobs are slated to be created or relocated here, with mid-rise office towers of 125 feet or more in some areas. In addition, thousands of new mid-rise residential units are planned or underway.

In addition to three planned light rail stations, the Bel-Red Corridor benefits from being adjacent to Microsoft’s main campus in Redmond. Also, the city of Bellevue, well known for its school system and desirable lifestyle, continues to be a strong draw for newcomers to our state.

While these are all positive attributes for new development, the current transitional nature of the neighborhood presents some challenges when compared to established centers like Redmond, Kirkland and downtown Bellevue. 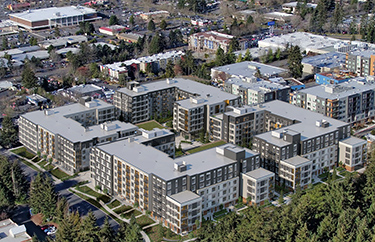 Images from Robin Chell Design [enlarge]
Hyde Square opens this month with 630 units and over 30,000 square feet of indoor and outdoor common areas. 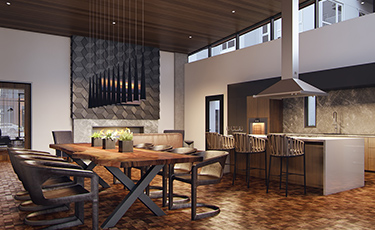 [enlarge]
One of the amenity buildings will contain this dining lounge and exhibition kitchen. 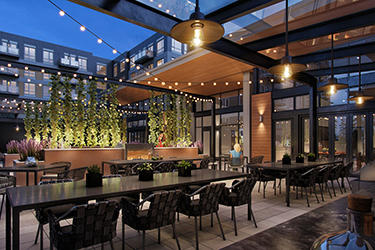 “With light rail on the horizon, and a strong demand for a Bellevue address, we are seeing the Bel-Red Corridor as the next major hotspot for multifamily housing,” says Emi McKittrick, marketing director for Indigo Real Estate. “However, without a pedestrian-oriented Main Street, walkable boulevards or traditional neighborhood businesses, the key for Bel-Red to staying competitive will be to step up with on-site amenities and services.”

With the neighborhood in early stages of transformation, a challenge for new multifamily projects is to provide communities that include social amenities that today’s urban renter has come to expect. Without the cool coffee shops, restaurants and breweries, it’s easy for prospective residents to perceive this area as a “no-man’s land.”

Neighborhood perception can be a determining factor when prospective renters are about to commit to $2,000 a month for a one-room apartment, or $3,200 for a two-bedroom apartment.

Creating an attractive and desirable community can be challenging when building in markets such as the Bel-Red Corridor, which has a prevalence of big box retail, strip malls and other low-density commercial uses. Yes, there is a convenience provided by chain stores and restaurants, but the charm of a diverse and walkable neighborhood is conspicuously absent.

Larger master-planned developments along the Bel-Red Corridor, including the Spring District and Esterra Park, are moving forward with on-site cafes, brewpubs and other services. However, much of the zoning along the Bel-Red Corridor allows for residential-only uses, thus many new apartment communities will lack ground floor commercial spaces. Though this may be a relief for some developers, the lack of such specialty businesses can adversely affect lease up and tenant retention.

With many people moving here from larger international cities, developers and designers are responding to the expectations of these renters. In lieu of on-site specialty shops, there is great opportunity in rethinking and reprogramming traditional apartment amenities. Former single-use amenities such as fitness centers, media rooms and clubrooms are being reimagined as multipurpose spaces that provide round-the-clock activity and plenty of social opportunities.

This approach not only helps activate amenity spaces, but also provides a better sense of community.

The key to implementing this strategy is to provide amenities that are inspired by those shops and services the neighborhood may be currently lacking, such as bike shops, cocktail lounges and cafes. We are seeing a wave of new on-site bike maintenance rooms, dog washes, DIY craft rooms, gaming lounges and co-working spaces in new apartments, as well as multipurpose yoga studios, and of course — rooms for gamers.

Developed by Carmel Partners, Hyde Square has four mid-rise buildings containing 630 apartments, as well as two buildings that house the leasing center and a multitude of amenities. When completed later this year, there will be extensive outdoor amenities, including a dog walk, landscaped courtyards and multiple dining areas.

A goal for this project was to convey a strong sense of place and provide a wide variety of active and social amenities.

Looking beyond the Bel-Red Corridor, our design team felt it was important to capture the spirit of the Pacific Northwest. With four separate residential mid-rises, we turned to the four corners of Washington state to provide inspiration and a unique identity for each building.

The interiors were subsequently designed to reflect a distinct corner or region of the state: The Cascade Mountains, The Coast, The Plains/Palouse and the urban centers of Puget Sound. For example, one of the lobbies is inspired by the Cascade Mountains, and includes a combination of stone, woods and strong geometric shapes. Another is inspired by the coast, featuring fluid shapes, ocean-blue fabrics and driftwoods.

Abstract photos, colorful murals and custom lighting used collectively tell the story of what makes our region special, and the result is unlike anything else in the Bel-Red Corridor.

Heart of the square

Hyde Square includes two centrally located amenity pavilions, which together have an extensive package of activities rarely seen in a single apartment complex. The buildings have soaring wood ceilings, and the extensive use of glass, wood and dark brick. The result is a clean, modern Northwest aesthetic that fits well within the overall design concept and uniquely sets the project apart.

Inside, the two pavilions offer an impressive collection of amenities that reinforce the active Northwest lifestyle and satisfy the expectations of today’s tech-savvy urbanites. Traditional amenities have been reimagined and taken to the next level, complemented by personalized and service-oriented touches. Interior finishes include stone, wood, blackened steel, custom light fixtures and expansive graphics that reinforce the spectacular natural diversity of the Pacific Northwest.

One of Hyde Square’s most prominent amenities is the Wellness Center in the east amenity building.

The Wellness Center has a large fitness area and a multipurpose yoga-flex studio with spinning, stretching and on-demand fitness. Included is the resident spa, with massage and change rooms, and a luxurious rarity for today’s apartment communities: a large sauna and outdoor hot tub.

The ground floor below has a co-working and conference center, fireside lounge and resource library.

Opening later this year will be the west amenity building, which is the hub for Hyde Square’s social amenities. This building will have a soaring central fireplace and lounge, private dining room and demonstration kitchen, co-work cafe, and a Northwest-inspired sports and game bar. It will open to an expansive outdoor patio with multiple dining areas, games and barbecues.

The four main courtyards include flora and materials found in our state’s distinct regions, from the lush greenery of the inland coast to the basalt columns found throughout the scablands of the Palouse. The design team was careful to balance the natural elements of the courtyards with active features that help maximize opportunities for outdoor activity.

Hyde Square represents an approach to design and programming that makes it a unique departure from the typical mid-rise product. This strategy was implemented to help elevate the neighborhood experience in this rapidly transforming district. This bold vision, embraced by the entire team, shows that the Bel-Red Corridor has amazing potential to become a truly vibrant neighborhood and an attractive option for urban living.