On the Block: Retail is having a revolution, so why does University Village keep working so well?

There are only 10 shopping days left until Christmas. And by shopping, I mean clicking — as so many people do this time of the year on Amazon and other websites.

Out of a projected $5 trillion in U.S. retail sales for 2016, USA Today recently estimated, Amazon will claim around 15 percent of the market, or $400 billion. To a sometimes alarming degree, Amazon's success has become Seattle's success, as evidenced by the congestion and construction in South Lake Union.

Yet there are brick-and-mortar exceptions to the trend. There are destinations where people actually drive — or walk or take transit or bike — to touch the wares, try on clothes and talk to friendly, knowledgeable sales staff. They do so to enjoy the experience, says CallisonRTKL brand and retail specialist Joan Insel. That experience “gives us stories we can tell,” she says. There's something you take home besides what's in your shopping bag: knowledge or narrative of “that local heartbeat that makes you feel like you're in the know.”

Native examples include REI, where you can use the climbing wall or test your hiking boots on a textured, trail-like surface. At Pike Place Market, tourists and some locals love the fish-throwing, fruit-touching, artist-meeting spectacle of the place: shopping as entertainment. Filson just opened a new mini-store in Ballard that emphasizes the same tactile nature of shopping, offering what Insel calls “an experience that can't be replicated online.” Starbucks has long mastered the art of creating a warm, inviting living room where the aroma of coffee — and free Wi-Fi — entices you to linger and shop.

Beyond such strong local brands, an aggregate case in point is University Village, the wildly successful shopping center where parking becomes nearly impossible this time of the year. Developed in the late 1950s, then revitalized by new owners Stuart Sloan and Matt Griffin in the mid 1990s, U Village just announced yet another expansion. 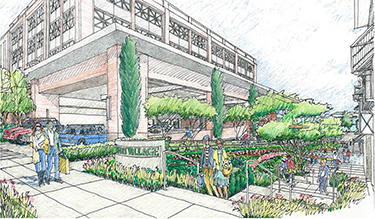 Image by Shugart Wasse Wickwire [enlarge]
The 24-acre complex is planning to add 100,000 square feet in six buildings, and 915 parking spaces. The design review meeting is set for 6:30 p.m. Dec. 19 at the Good Shepherd Center.

There's no precise timeline or tenants signed, but the 24-acre complex will add six buildings, 100,000 square feet and 915 parking spaces. (Shugart Wasse Wickwire is the architect, and Hewitt is the landscape architect.)

Such confidence is well-founded. University Village vice president and general manager Susie Plummer says the complex is fully leased and potential new tenants are pounding at the door.

Why does U Village work so well? “It helps to be owner-operated,” says Plummer.

The team assembled by majority owner Sloan tend to be lifers. Plummer has been with the company for over 16 years, she says. After work she can meet friends for dinner on the campus — and, inevitably, gather market intelligence from those same friends who shop there. “We live here,” she says with a laugh.

Though U Village doesn't use outside retail consultants, much of Plummer's accumulated wisdom echoes that of Insel, who speaks of the “retail fatigue” that comes with giant, generic malls and big-box stores; that kind of shopping has become something to escape. And likewise the infinity of shopping options on the Internet.

Instead, says Plummer, when shopping by choice, you value “the touch and the smell and the experience … the smell of Molly Moon making her waffle cones and getting you away from your computer.”

Volume of goods isn't the point. Discovery is. Part of what makes the big box or generic mall so stultifying is the sheer predictability. We know exactly where on what aisle to pick up our monthly pallet of cat litter. Such shopping is clean and antiseptic, not sensory.

By contrast, especially among U Village's smaller shops in the old central arcade, you're not walking “a long straight line, you're turning corners … in a real-time experience of exploration,” says Plummer. This route-finding imprints itself upon the brain, creating a kind of geography of desire. The landmarks of childhood stick with us for life.

Over at Bright Horizons Child Care parents can dump their kids for a few hours of uninterrupted shopping (or dining or drinking), notes Plummer. “These kids have grown up at U Village.” And they'll continue to return as adults.

That process of exploration speaks to Insel's point about stories. It's not just the thing you bought but how you found that thing that proves memorable. Those are the associations triggered when someone admiringly asks where you bought your sweater. And there's no more boring answer than, “Oh, on the internet.”

Those with long memories of U Village may recall the Rhodes store that became Lamonts that became Barnes & Noble — all vanished now. “Retail is changing so fast,” says Plummer, and smaller stores can now serve as de facto showrooms for larger operations that use the web as their warehouse. She cites the example of Warby Parker, the trendy online eyeglasses brand that now operates at U Village. Or the men's clothier Bonobos — another online offshoot with a store that functions more as a showroom.

Insel sees a trend toward smaller, more intimate formats of 2,000 square feet or less. U Village has availed itself of this trend. Though Apple, Bartell and Crate & Barrel occupy large, conventional spaces, there's a surprising array of smaller shops among the 120 stores and restaurants (40 of them local). Some shops, says Plummer, are as small as 600 square feet.

RH Gallery, an offshoot brand of Restoration Hardware, opened last month in the Gateway Building, with three stories and 45,400 square feet. But even there, says Plummer, the place has been designed to offer “pockets of calm moments,” places to relax and chill, much like Howard Schultz's vaunted third places. (And here's a footnote to Starbucks' corporate history: the U Village location was its second store, opening in 1972!)

We remember places by virtue of their scale, smell and texture. During a recent chat, Insel and I — both Seattle natives — quickly traded a series of fond names from the U Village of yore: Kay's Bookmark, Don's Hobby Shop, Fiorini Sports, Ernst/Malmo, the Turbulent Turtle.

Fran's Chocolates is still there, and The Confectionary has been selling candy at U Village for almost 40 years. They endure, in part, because shoppers still like to follow their nose, not their cursor.

Plans for the U Village expansion will be shown at a design review at 6:30 p.m. Monday, Dec. 19 at the Good Shepherd Center, 4649 Sunnyside Ave. N.