Early flood warning gets a boost from technology

The authority quickly determined that improvements were needed to the existing early flood forecast and warning system used by residents and governments in the Chehalis River Basin. The region required a more reliable information network instead of what had become a word-of-mouth warning process.

On behalf of the flood authority, WEST Consultants worked with community groups, tribes and local governments within the basin to assess current flood preparedness practices and needs. We reviewed flood forecasting and related programs of the National Weather Service, the U.S. Geological Survey, the U.S. Department of Agriculture Natural Resources Conservation Service, the U.S. Army Corps of Engineers, and the state departments of Ecology and Transportation. 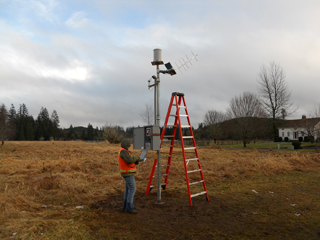 Photos courtesy of WEST Consultants [enlarge]
A rainfall and temperature station was installed at the Riverside Fire Authority site.

One of our biggest challenges was sorting through the range of local resident and community needs to develop an approach with the greatest benefits for the flood authority. There was limited funding available so cost-effective solutions were necessary. We chose to bring together existing resources and off-the-shelf products as much as possible to create immediate benefits.

We helped create a plan to improve flood threat identification, agency coordination and communication with the public. The plan includes an Internet-based data collection, display and delivery system plus additional rainfall, temperature and river monitoring stations to fill gaps in existing monitoring networks in the Chehalis River Basin.

The need for the plan was apparent after the 2007 and 2009 floods. The NWS and other interests in the basin identified gaps in the region’s river and stream gauging network that hindered flood forecasting. Ten automated rain gauges, 10 temperature sensors and two stream gauges were added to existing flood threat detection networks. 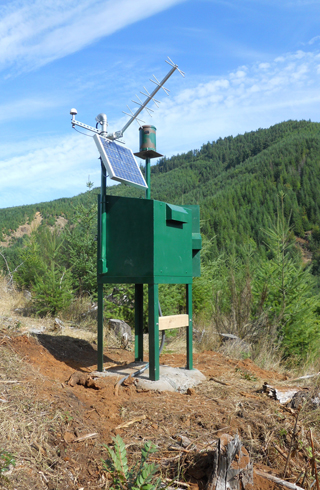 Today, more than 100 weather and river sensors in the Chehalis River Basin and neighboring areas monitor developing flood conditions. Most of the gauges automatically transmit their readings each hour through a satellite data collection system called GOES. When observed rainfall rates are too high or water levels are rising fast, the system alerts local emergency managers that flooding might occur.

The new gauges are critically important to confirm the information from the new multimillion-dollar NWS Doppler radar installed at Langley Hill near the mouth of the Chehalis River. It’s all part of a coordinated multi-agency effort to improve flood warning in the basin that has been strongly supported by the local congressional delegation.

According to Brent Bower, NWS hydrologist in Seattle, “Rainfall is one of the most important inputs to river forecasts and more gauges will help improve the forecasts. In addition, the network of gauges helps forecasters do a better job of verifying the structure of storms coming ashore, which results in better short-term weather forecasts.

“Rain gauges are absolutely critical to turning radar information into actual estimates of rainfall,” he added.

The public can view flood data on the authority’s Contrail website (See http://lewiscountywa.gov/chehalis-river-basin-flood-authority for access instructions.). Rain, stream, reservoir, wind, temperature and other weather information are collected, displayed and used immediately. Users can access current conditions in the basin along with the latest NWS river forecasts, check for local road closures from the Washington State Department of Transportation, and find other flood preparedness information from federal, state and local sources.

The Contrail flood inundation maps show where flooding is to be expected at each forecasted river stage. The website provides real-time access to flooding data, putting the information in a local context, enabling residents to be better prepared. 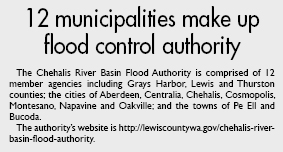 The Chehalis River Basin Flood Warning System got its first test one week after the public rollout of the system and website in November 2011.

“It’s great having real-time river and rain data, weather forecasts, and flood inundation maps all available in one location,” says Dan Thompson, public works director for the city of Oakville and Chehalis River Basin Flood Authority board member. “More and more people are using the system to be better prepared for developing flood conditions.”

Dr. David C. Curtis is a flood forecast system expert and vice president at WEST Consultants. He also is president of the National Hydrologic Warning Council.