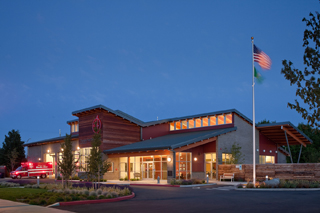 Photo by William Wright Photography [enlarge]
Rice Fergus Miller is designing a remodel and additions to Fire Station 49 in Olympia.

As the economy rebounds, architects are still feeling the effects of the recession in an area that would have been hard to imagine just five years ago, according to David Fergus of Rice Fergus Miller Architecture & Planning.

Clients these days feel they are in the position to question what architects charge, according to Fergus.

“We have seen a lot of pressure on fees,” he said. “As both the construction and design industries have contracted it has become a buyer’s market. Clients are asking more frequently about hourly rates and fees, and comparing them to other architects.”

In response, Fergus said, we are constantly evaluating how we get work done, exploring ideas like lean building strategies.

“Being able to produce the same high-quality design results quicker and more efficiently is what will carry us into the future,” he said.

“This has been a steady shift over the last three years and one we expect to continue, at least for the near-term,” Fergus said. “Replacing this public-sector work has been some of our markets that took the biggest hit in 2008.”

On the bright side, Fergus said he has been pleasantly surprised that additional work has come from the hospitality market. That work is primarily interiors, as hotels reposition themselves by doing what he called “extreme makeovers” to guest room furnishings and finishes. The firm is doing several such projects in Las Vegas and Southern California.

In addition, he said the heath-care sector has seen a good uptick in work this year. “Our senior housing market, which took one of the biggest hits four years ago, has rebounded strongly,” he said. “Several years’ worth of marketing and relationship building paid off in 2012 in the areas of hospitality and tribal projects.”

Rice Fergus Miller designed a 54,000-square-foot addition to Silverdale Orthopedic Hospital, which is under construction. The firm also is designing a remodel and additions to Fire Station 49 in Olympia, and is in the schematic design phase of the West Hills STEM School makeover for the Bremerton School District.

It’s been a challenge pulling through tough economic times, according to Fergus. “While our workload and staffing levels have remained steady, everything else around us has changed dramatically,” he said. “The pace is faster, the competition tougher and the volatility of projects starting and stopping has brought many challenges.”

Fergus is looking forward to an improved environment for architecture next year.

“A lackluster economy, low confidence in its recovery and difficulties in borrowing money have all contributed to clients not wanting to pull the trigger on their projects. While our backlog of work that is sitting at the starting gate is healthy, start dates have been moving targets. Overall, the market feels pent up. The recovery will come; it’s just a matter of when. Let’s hope it starts in earnest in 2013.”