Seattle may occasionally be associated with dreary weather, but it’s also known for its thriving tech industry and its forward-thinking efforts to cut carbon emissions, including a recent pledge to become North America’s first carbon-neutral city.

We kept both of these characteristics in mind as we planned the design and buildout of our Seattle-area data center in the Sabey Campus of the high-tech Intergate East community.

One of the main design elements that distinguishes our Sabey facility is its use of an abundant resource offered by Seattle’s cloudy days — cool outdoor air — to maintain ideal temperatures for the IT equipment and systems inside. The incentive to use this type of natural energy-saving method is enormous: According to the New York Times, data centers worldwide consume roughly the same power created by 30 nuclear plants. 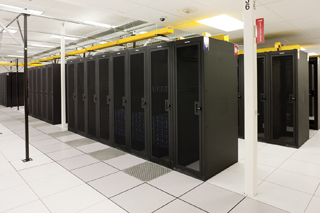 Nearly half of that power is used for the buildings’ cooling systems, so optimizing those systems is one of the best ways to reduce energy consumption. By using this design technique at our Seattle facility, we’ve been able to reduce HVAC-related consumption by 40 percent annually.

As we design any new or expanded facility, we aim to use the natural resources that are available in a particular geographic location, such as outside air and reclaimed (versus potable) water, to create energy gains. As you might guess, the use of outdoor air for cooling isn’t possible in warmer climates such as Dallas or Houston. But here in the Northwest, the weather is actually an advantage. We installed air economizers on the roof of the data center that take in cold air and blow it straight into the building.

Additionally, we installed variable-speed fans and multistage compressors that ramp up and down as needed, instead of running continuously.

We also built the facility to use an uninterrupted power supply, which can deliver a 95 percent efficiency rate by only ramping up when computing demands increase, as opposed to consistently running at maximum capacity.

Supplementing these advanced green design techniques at the Sabey facility are just as many low-tech measures. These are equally important, and they’re similar to green design features you might recognize in many other types of buildings today, even residential buildings. For example, we built in high-efficiency lighting connected to motion sensors, which only activate when people are in a specific area of the data center. 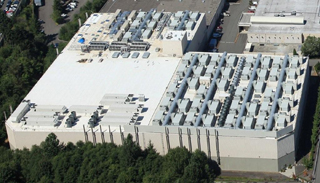 Other green measures are Energy Star-certified equipment and a white roof that deflects as much heat as possible. And, we always consider proximity to public transportation — the facility is near the Tukwila International Boulevard/state Route 99 ramp bus stop. Bike racks and showers encourage alternative forms of transportation.

This focus on delivering green data centers across our entire footprint of facilities, including Sabey, aligns with many of our customers’ emerging corporate initiatives. One example is Rhapsody, the Seattle-based music-streaming service that has made environmental responsibility part of its mission statement.

There are a number of building standards organizations that validate data center energy efficiency. All of our new data centers are designed with LEED certification in mind, as well as other certifications and standards, including Energy Star, the Green Building Initiative’s Green Globes, PUE and ASHRAE. In addition to LEED, our Santa Clara, Calif., site was the first commercial data center in the U.S. to achieve Green Globes certification, and our Dallas facility was the first in Texas to receive that honor.

The growing dependence on hosted applications and content is driving the rapid construction of new data centers. And since power consumption is the most costly by-product (both financially and environmentally) of running a data center, proper planning and execution of efficient design is critically important.

Randy Ortiz is Internap’s vice president of data center design and engineering. With more than 20 years in the industry, Ortiz leads the design of each of Internap’s data center construction projects, including its newest facilities in Dallas, Los Angeles and Santa Clara, Calif. He also sits on the board of the AFCOM Data Center Institute.