Projects: Lincoln Square expansion in Bellevue; 42-story 815 Pine residential tower in Seattle; The Vermont in Los Angeles, a mixed-use community with residential towers of 24 and 30 stories 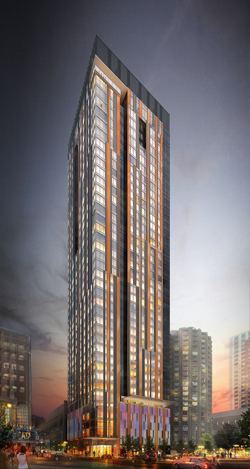 Illustration by studio/216, courtesy of Weber Thompson [enlarge]
CKC is the structural engineer for 815 Pine in Seattle. The 42-story residential tower will have 386 units when it opens in January of 2015.

Bellevue structural engineering firm Cary Kopczynski & Co. suffered during the recession as projects it specializes in — urban hotels, multifamily residential, office, retail and parking structures mostly for private developers — stopped getting built. “We were kind of in the bull’s-eye,” said Cary Kopczynski, senior principal and CEO.

Staffing fell from 40 before the downturn to 20 in 2010, and the firm worked to find ways to operate more efficiently.

Now its margins are higher than before the recession and the type of work it does has come back, said Kopczynski.

The 26-year-old practice is providing structural engineering on some big projects: 815 Pine, a 42-story residential tower in Seattle; and the Lincoln Square expansion, a 2.8 million-square-foot mixed-use complex in Bellevue with an office tower, luxury hotel/residential tower, retail and seven levels of underground parking.

“There’s been a lot of growth in the apartment market, and from what we’re seeing that will continue into the future,” said Kopczynski, “and I guess the question is for how long? Like any big expansion in a particular market sector you wonder how durable it will be.”

The firm is also working on a $500 million development in Lake Charles, La., that has a casino on a massive barge, two high-rise hotels, an 18-hole golf course and a large parking garage.

Kopczynski said he’s even heard talk from some developer clients about building condos on the West Coast, although not in Seattle and Bellevue.

According to Kopczynski, the firm in the past decade has selectively pursued work outside the Northwest. Now, he said, there is “no shortage of good quality project opportunities in the U.S.” and that his firm is pursuing jobs in Florida and Arizona.

The CEO said that prior to the recession, the firm worked in Dubai and South Korea. It doesn’t have international jobs now, but as the economy continues to expand, it “will selectively look at opportunities,” he said.

Kopczynski said his firm doesn’t do civil engineering along with structural, as many of its peers do. Specialization in the structural side allows it to maintain a sharper focus, he said, resulting in a higher level of expertise in the building types it pursues. “Staying focused on structural engineering we believe allows us to be better at it,” he said.

CKC works on a fair number of parking garages, and some of that work has helped it get other jobs. “We have found that doing parking well has been a good lever for us into other kinds of work,” including office, hotel and apartment projects associated with the parking, the CEO said.

Depending on the project, parking can take up as much or more space than other uses, he said. It typically is not a profit center, so the goal is to keep costs down while still designing a user friendly, high-quality structure, he said.

Ninety percent of the firm’s jobs are for private developers, and it intends to keep its focus there, Kopczynski said.

However, the recession encouraged it to also delve into the public market to help it broaden its client base and provide more revenue stability, he said. It has become a preferred provider through the General Services Administration, and is seeking more public work, including federal.

Kopczynski said that before the downturn developers were able to fund a larger portion of their projects with debt as opposed to equity. Now a developer “has to have a lot more money in his pocket when he walks in to get a loan.”

The higher equity requirements have limited the playing field to fewer but healthier players, creating a more stable long-term market, he said.

The structural engineer expects more people to gravitate toward city living. This influx will result in a more “3-D city,” with more transit and retail services “that will ultimately benefit all of us,” he said.

Continued economic and political uncertainty is the biggest challenge facing his industry, Kopczynski said. He said hopefully it will diminish after the November election so business owners have more clarity to make longer-term decisions.