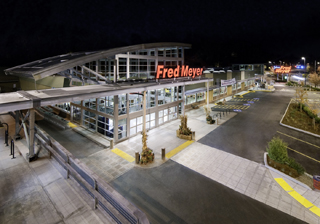 Although 2012 was a good year for MulvannyG2 Architecture, CEO Mitchell Smith said he’s looking toward 2013 for a return to stability.

Bellevue-based MulvannyG2, which focuses solely on private-sector projects, experienced good growth in 2012, as projects such as the downtown Seattle CityTarget and several China and Canada projects kept the firm busy.

“I think that 2013 will be more solid and predictable than this year,” said Smith.

Smith predicts that developers will be able to approach new projects with greater confidence than in 2012 — a period that has been marked with uncertainty about funding. “There is still a little indecisiveness left over,” he said, referring to developers’ view of the economy in the post-recession era.

However, MulvannyG2 has completed major projects this year. The CityTarget store in Seattle is a retrofit, and MulvannyG2 was challenged to come up with a new design for the retail giant.

“We had to figure out how to translate the Target brand into the actual physical setting,” he said. “That obviously demands original solutions.”

MulvannyG2 will take elements of the CityTarget Seattle prototype and apply them to a similar store the firm is designing this year in Los Angeles. The firm also redesigned a large Fred Meyer supermarket in southwest Portland — reviving a tired warehouse-like environment into a more open, naturally lighted space in keeping with modern demands of grocery shoppers, he said.

MulvannyG2 has also stayed active in China. The firm designed a prototype for Suning Appliance Co., one of the largest electronic appliance retailers in the country. Four of the stores have opened in China this year, and Suning plans to open 20 more in 13 cities in China, as well as renovate 400 of the stores based on the MulvannyG2 prototype.

Finding work in China has not been difficult, but Smith said a challenge has been finding qualified designers to staff the Shanghai MulvannyG2 office.

“It’s a real challenge getting talented people,” he said. “Right now, in China, it’s similar to how it was here in 2007, when it seemed there weren’t enough architects in the world,” he said.

In the area of office design, Smith said the firm has found work doing interior renovations. The office development market is still soft and he predicted that trend to continue through the year.

“There wouldn’t be much of anything going spec nowadays,” he said, referring to developers’ reluctance to build spec office space in this economy.

Smith said he looks forward to continued growth, as the economy climbs out of the doldrums. “There will be more stability and confidence in the economy in 2013,” he said.