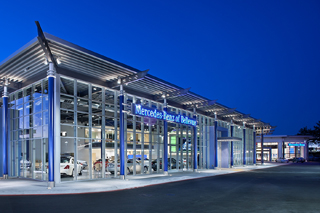 Photo by Sozinho Imagery [enlarge]
Lance Mueller and Associates designed an addition for Barrier Motors Auto Group in Bellevue that was based on the AutoHaus concept, with distinctive columns and exposed steel structures.

Chasing hot markets in architecture, according to Lance Mueller, can end up badly from a business standpoint.

“When the office market was booming, it got overbuilt; and the same with retail,” said Mueller. “Now everybody’s jumped into the apartment market, but I wouldn’t want to be the last developer in that field.”

Mueller sticks with what he knows best and said he is leery of hopping on the bandwagon when a market gets hot. “We’ve tried not to be architects for everything,” he said.

Recently, what has worked for Mueller are projects such as tenant improvements and car dealerships.

“Due to the recession, people have been attracted to good deals for tenants,” he said, referring to office buildings.

His firm landed a tenant-improvement job that involved redesigning space in a Kirkland building that Mueller designed a few years ago as a spec building. The new project, with Redmond’s Astronics Advanced Electronic Systems as the tenant, is a 90,000-square-foot project.

The firm has also designed a 350,000-square-foot distribution center in Sumner. The firm designed the building in 2007, but the slow economy meant putting the project on hold until now.

Mueller’s firm has also designed an addition for Barrier Motors Auto Group in Bellevue, which was completed last year. The designs are based on the AutoHaus concept set by Mercedes Benz, with distinctive columns and exposed steel structures. The firm is also designing a 110,00-square-foot auto inventory garage for the AutoCenter Northwest car dealerships.

During the recession, Mueller elected not to downsize his firm. His current staff is at 16. Although he has weathered the recession and has found work in tenant-improvement projects, Mueller said he is cautious about the future for the architecture business.

He cautioned that another bubble might be in the making. “I think the apartment market is being overbuilt, so that bubble will likely slow down that design and construction activity soon.”