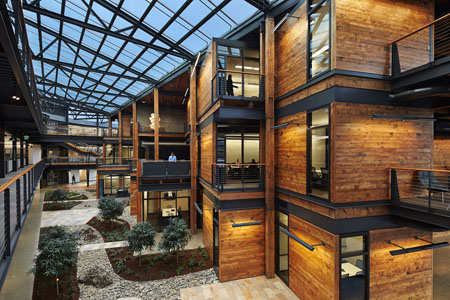 Photo by Benjamin Benschneider [enlarge]
Federal Center South reclaimed about 200,000 board feet of structural timber from an on-site warehouse built in the 1940s.

The Federal Center South project reclaimed structural timber from a 1940s warehouse to create a 21st century building that merges the working environment into nature. It is the new Seattle District headquarters for the U.S. Army Corps of Engineers.

The building is an American Recovery and Reinvestment Act-funded project as well as part of the U.S. General Services Administration’s Design Excellence program. It is anticipated that the 209,000-square-foot building will be in the top 1 percent of U.S. buildings for energy performance and will become one of the region’s most energy-efficient air-conditioned buildings.

The crooked U shape of the building was inspired by the original course of the Duwamish Waterway, which flows behind it. The building is oriented toward the water to reflect the corps’ focus as an agency.

Reclaimed wood, an open concept, and a multitude of different materials and textures give this building a unique look and feel.

General contractor Sellen Construction helped minimize difficulties with the open-concept design and unique shape of the building. The two ends of the building slope vertically in opposite directions and the degree of the slopes and a nearly continuous exterior-glazed front presented challenges.

Judge’s comment: “The Federal Center South project’s oxbow-shaped floor plan, integration of 1940s reclaimed wood, and the open interior concept have created a magnificent scheme that makes its occupants feel close to the outdoors. These attributes along with the unique building angles presented many challenges for everyone involved.”