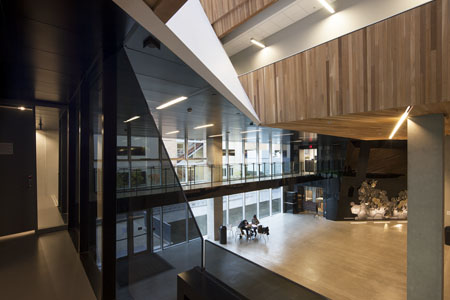 Photo by Bob Motheson [enlarge]
Construction of the Pharmaceutical Sciences Building started when drawings were only 60 percent complete.

(Editor's note: Saucier + Perrotte Architectes was added to the list of architects.)

Completed in September 2012, the Pharmaceutical Sciences Building is a 246,000-square-foot learning and research facility on the University of British Columbia campus. The $133 million complex houses for the first time under one roof all teaching, learning and research facilities for the pharmacy program and The Centre for Drug Research and Development.

Since the split occupancy and final occupancy dates were written in stone, this project was forced to start with drawings that were only 60 percent complete. Some drawings were in concept form only and Power Drywall had to devise methods of construction to achieve the design vision.

The lecture halls were particularly affected by design issues and the aggressive schedule. All acoustic panels were put into production without the benefit of field measurements. In the large lecture hall, radius panels were laid out on the floor. The dimensions of the second lecture hall and the layout of the acoustic wall panels were altered after the original order, requiring re-fabrication at the site.

Finally, installation of a walkable ceiling (interstitial floor) was needed to access mechanical units above the already installed ceiling. Power Drywall was given the task of designing, engineering and constructing this 2,500-square-foot walkway by suspending a plywood subfloor from threaded rods.

Because of the fast-track schedule, all materials and equipment were pre-ordered. On-site storage and managing deliveries were also challenges.

With the design changing daily, communication between the architect, project manager, foreman, sub-trades, suppliers and manufacturers played a crucial role in keeping the project on schedule.

Judge’s comment: ”In spite of the fast-track schedule, which required many of the custom-made products to be manufactured prior to field dimensioning, this project turned out virtually perfect. It is a showcase of many different products that truly stand out in part due to the outstanding craftsmanship.”