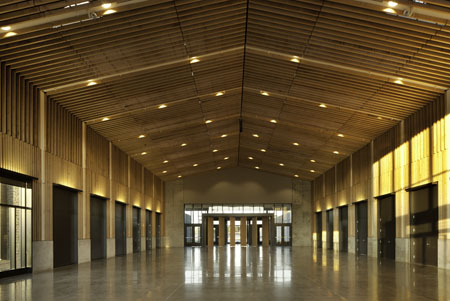 The building has an assembly hall, classrooms, commercial kitchen, small-arms-training simulation room, workout facility and equipment maintenance shop. It doubles as a community center and, unlike most military spaces, is available for public rental.

The assembly hall is the centerpiece of the building, with western hemlock wood panels for the ceilings and walls. The wood is rough-sawn and attached to Tectum panels on the walls and acoustical grid at the ceilings. Natural light streams through several skylights.

Performance Contracting said the most challenging aspect of the project was panel alignment in the assembly hall. The wall panels start on one side of the room, align with ceiling panels, and continue down the other side of the room. The wood troughs and multiple doors added an extra element to the difficulty because the reveals and panel alignment were crucial.

Judge’s comment: “This facility will perform very well as a mixed-use facility accommodating both the Army National Guard and a public community center. The beautiful wood wall and ceiling finishes have been accentuated by the perfect alignment of the panels. This is a brilliant demonstration of natural products and exceptional craftsmanship.”