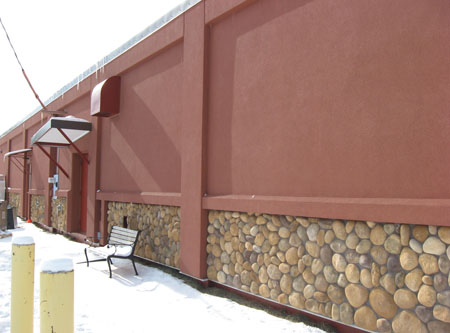 Photo courtesy of NWCB [enlarge]
EIFS exteriors and other energy upgrades were added to three buildings at Fort Greely.

In the third year of work at Fort Greely, three 1960s-era barracks buildings were chosen for energy upgrades to reduce heating fuel consumption. With a total of 40,000 square feet, it was the largest energy restoration project in Alaska in 2012.

The remote location posed considerable shipping challenges with the large quantities of material needed to complete the project during a four-month construction window. Since Fort Greely is a missile defense facility, crew members had to get special clearance before they were admitted on base. Housing and adverse weather conditions were other challenges.

Materials used for the original construction of the barracks had proven inefficient to withstand extreme temperatures swings of 90 degrees in the summer to minus 60 degrees in the winter. Infrared thermography conducted on each building showed large amounts of heat loss from a lack of insulation and considerable air diffusion.

A fluid-applied air barrier and proper amount of foam thickness were added to the buildings. An adhered mat design was used to reduce abatement by encapsulating numerous coats of paint possibly containing lead.

The Army hopes to save significant money in heating and cooling costs at the base for years to come.

Judge’s comment: “The goal of improving the energy efficiency of this building was definitely achieved. The added bonus was the improved exterior appearance of the building. This is a perfect example of the benefits of an EIFS exterior cladding system.”