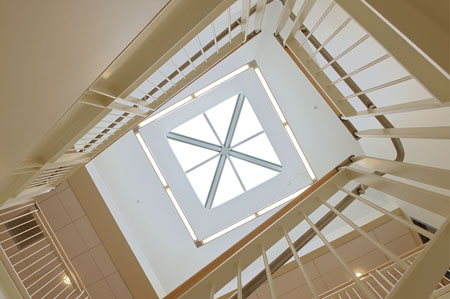 Two buildings were involved in the scope of this project: a remodel of Chiles Center and a renovation of Gilbert Hall (now Anstett Hall). The Chiles Center project was a three-month remodel of two floors, with the second floor consisting of a computer lab and a business research center.

The Gilbert Hall portion was a full renovation and seismic upgrade of a building constructed in 1919. The upgrade consisted of building three interior concrete shear walls, installing nearly 800 shear and tension anchors, and constructing a new roof structure. The building was then renovated for four new university classrooms, graduate offices, student lounges and department offices.

At Chiles, new windows were installed in the exterior envelope with structural steel frames supporting the new openings. Because new brick was “toothed-in” around the windows, Performance Contracting had to frame, install sheathing and put in weather barriers while not disturbing the existing facade.

At Gilbert, a new roof, large centerpiece skylight, two additional skylights and new window sashes were installed. The university’s planning department deemed the west-facing windows as historic, and Performance Contracting was instructed not to replace the sashes. That created a challenge because the existing finishes could not be disturbed.

In addition, after the existing finishes were removed, the dean of the Business College was admiring the existing wood framing cut into a cove in the ceiling of Room 391 and instructed the design team to redesign the ceiling to capture the historic coved look.

Performance Contracting said the most challenging aspect of the project was matching existing finishes and blending them seamlessly over framing constructed more than 90 years ago.

Judge’s comment: “The complete removal and installation of new finishes to Gilbert Hall resulted in a beautiful finished building. The new finishes enhance the existing historic structure and have created an environment that is fantastic for students.”