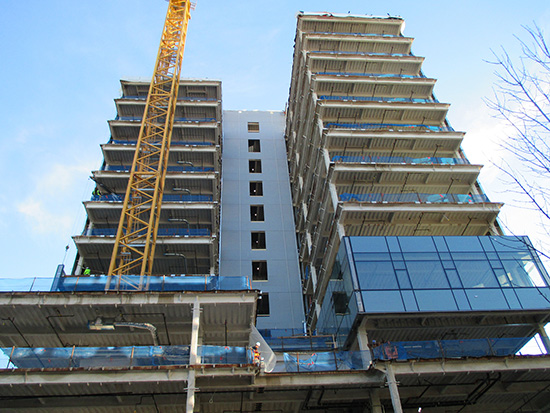 Photo courtesy NWCB
Western Partitions built 385 panels at an off-site facility and installed them as they arrived.

Vulcan Block 45 is a 13-story, 317,000-square-foot office building in Seattle’s South Lake Union neighborhood. It consists of private and open offices, conference rooms and break areas on floors three to 12 for Amazon employees.

Due to constricted site conditions and limited storage space, a “just-in-time” material management system was used. Western Partitions built 385 individual panels, complete with sheathing and air/vapor barrier, at an off-site facility in Salem, Oregon, and trucked them over 200 miles to the jobsite.

Western Partitions also framed, in place, hundreds of linear feet of soffits and parapets. The team installed and secured an average of 10 tower panels (31-by-12.5 feet) and 16 podium panels each day. The work was done at the same time as concrete pours and while using a non-dedicated crane.

Turner Construction was the general contractor.

Judge’s comment: “This is an excellent example of a successful project using panels prefabricated off site. Panelization of the exterior walls on this project accelerated the schedule, reduced congestion on the project and enhanced the project collaboration process through the use of BIM.”