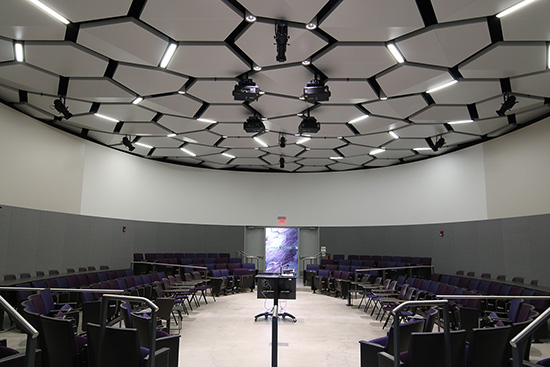 Photos courtesy of NWCB
Classroom 200 is semi-elliptical in layout with a ceiling made of hexagonal panels. 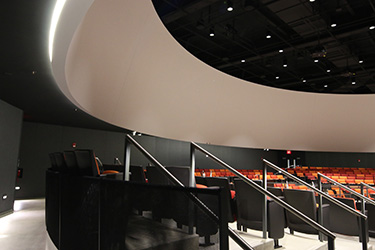 Classroom 100 has a 360-degree elliptical screen.

From the outside, this four-story, $65 million brick building looks like most campus buildings, but according to Michael Tingley of Boora Architects, “This is the most unique and sophisticated lecture hall in any university in the world.”

Classroom 100 has a ceiling consisting of hand-troweled and fireproofed beams. A Uni-Strut system supports the lighting and a state-of-the-art sound and visual display system includes a 360-degree elliptical screen.

Classroom 210 has a multilevel acoustical ceiling tile system commonly referred to as a “saw-tooth ceiling.”

Classroom 200 is the building’s showcase. It was constructed in a semi-elliptical shape with sound panels and video screens on two walls. The ceiling has hexagon-shaped metal panels supported by a Uni-Strut system hung from the deck above.

Several locations contain a full-height radius sound wall intersecting a large mechanical duct. Special care was taken to ensure the walls were not only structurally sound but also airtight and soundproof to avoid sound transfer from one room to another.

Judges’ comments: “This project incorporates a large variety of products yet provides a very clean appearance without clutter. The unique design complements the historic scheme of the existing campus buildings but incorporates modern technology that will benefit OSU students for many years.”

“Some of the features on this project left the judges wondering, ‘How did they do it?’ This project demonstrates the endless possibilities of steel framing. These systems couldn’t have been constructed without the exceptional knowledge of the craftsmen involved.”