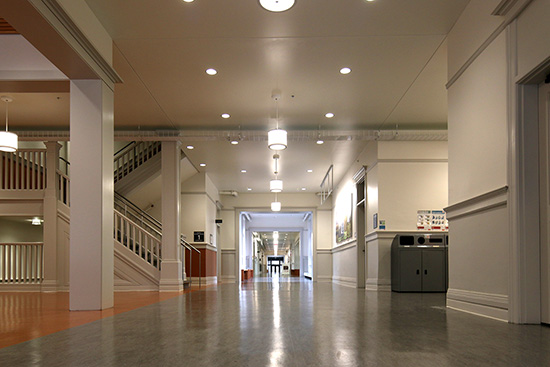 The Oregon State University Strand Agricultural Hall project is a four-story renovation of a 102-year-old brick building in the center of the campus. The age of this structure created some challenging situations, including areas where the floors had settled nearly a foot over time.

The overall project consisted of major structural upgrades and a complete rework of the interior finishes. Work was done in three phases while the building was occupied.

Since the corridor wall structure remained in place, Western Partitions spent a great deal of effort patching the existing wood lath and plaster system along the corridors with USG’s Imperial Veneer plaster system to bring them up to the quality level of other finishes.

Many sections of the building had been upgraded or remodeled but were not fully documented. As a result, unforeseen surprises were dealt with by Western Partitions, general contractor Hoffman Construction and Hennebery Eddy Architects.

Ultimately, the renovation improved the seismic conditions, safety, accessibility, comfort and energy efficiency of the building.

Judge’s comment: “A fantastic restoration of a historic gem. The fine workmanship rekindled the beauty of classic finishes. This project is a brilliant integration of old features with new products.”