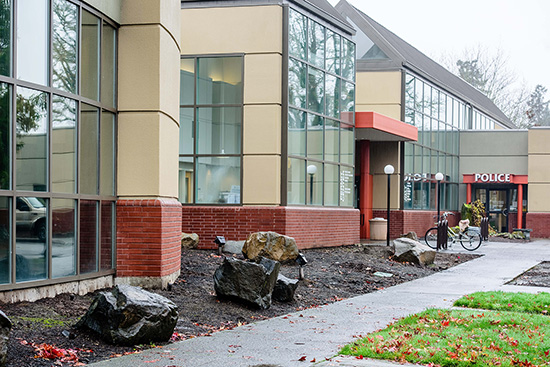 While most of the work on Tigard City Hall was restoring the existing EIFS exterior cladding, Applied Restoration also served as the general contractor, working directly with the owner and architect and coordinating subcontractors.

The project was to be completed in two phases, starting with the permit center and finishing with the courthouse the following year. Not only were these buildings occupied by city staff but had to remain accessible to the public during construction.

In phase one, upper sheet-metal roofs were replaced and upgraded. The EIFS was then coated in a high-performance elastomeric coating and new silicone sealants for a watertight system.

The two buildings are connected by a large steel canopy, which was stripped down to the steel structure and rebuilt with added steel to a new shape. TPO roofing, a skylight and a direct-applied finish system were added. Existing storefront windows were re-framed and re-coated in a metallic finish.

Phase two was completed the following summer and was a repeat of phase one. The final finishes included a new warm color scheme that dramatically changes the look and feel of the buildings.

The project shows how a 20-year-old EIFS system can be brought back to life.

Judge’s comment: “This is an excellent example of how an existing EIFS system can be renovated to rebirth an existing building. The restored system gives an inviting and contemporary appearance that will give the city of Tigard a beautiful building for many more years.”