Finally, there is light at the end of the tunnel — yes, pun intended. I recently arrived back in Seattle after a week-long business trip that swung through San Francisco, Los Angeles and New Orleans. I purposely chose to leave my car at home and use the Link light rail system from Sea-Tac to the newly opened University of Washington Station for my return rather than my usual method of off-site airport parking at the Jet Motel.

Like Seattle, San Francisco traffic faces some of the same pressures — geographic confinement due to hills, waterways, bridges and unending growth in the high-tech sector — only on a more dramatic scale. Navigating the region is demanding and time consuming.

Automobile-centric LA is endlessly congested, with dozens of freeways so numerous they need to be referred to with the designation “The” before every interstate number. Years ago one could always tell when a new DJ moved to a radio station in Seattle from California because they would refer to I-5 as “The I-5.”

After being exhausted by the traffic in those two cities I decided to “Uber” it in New Orleans rather than rent a car. Once back in Seattle I would use the Link to round out my progression of transportation modalities.

How refreshing it is that in Seattle we now have a glimmer of hope for the future as our north-south automobile corridors become increasing congested at all times of the day. I-5 through downtown is a bottleneck with no conceivable fix, and Highway 99 will be in a state of confusion for years as the viaduct and massive Bertha tunnel project progress at their uncertain pace. 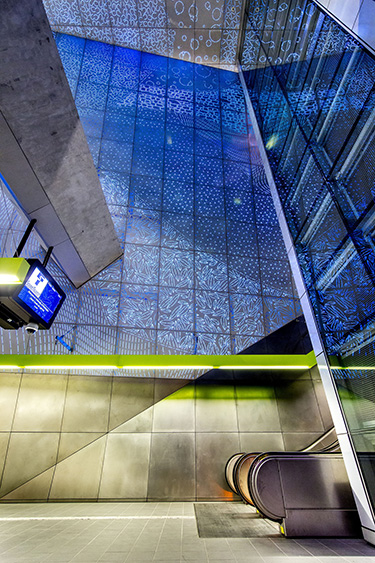 Photo by Don Wilson, courtesy of Sound Transit [enlarge]
Leo Saul Berk’s artwork “Subterranean” is a series of perforations cut into the metal wall panels of the underground collection chamber.

With the opening of the new Capitol Hill Station and the farthest north station at Husky Stadium, it is possible to move from Sea-Tac Airport north all the way to the U District with ease and comfort. This at a low cost — $3.25 for the full length ride.

It took me exactly one hour from when I left the terminal and walked to the train platform to my arrival at UW Station in Montlake, all without the hassle of waiting for a shuttle to the off-site parking, and then driving through who knows what kind of traffic just to get to I-5, Interstate 405 or Highway 99. The short walk through the airport parking garage and then along a pedestrian corridor took about five to seven minutes.

Curiously, the steady stream of passengers walking to the platform consisted of people of all ages, ethnicities and types. Buying the ticket from the vending machine was simple and I noticed many people reloading their ORCA passes. All three train cars filled to near maximum capacity before departing the station and heading north.

Many more passengers boarded at Othello Station and it appeared seats were full, with many passengers standing. While I was curious about the demographics of how people used the system along the 13 stops, my main interest was to see the crown jewel of the stations: UW Station.

The University of Washington is like a second heart in the circulatory system of Seattle. The main beat is downtown pushing and pulling vitality in and out of the central business district and newly built up South Lake Union; but the UW has a multitude of vital influences as well in its arterial flow.

LMN Architects designed UW Station to fit into one of the most challenging sites in the city. On the southeast corner of campus sits UW Medical Center, Husky Stadium and Alaska Airlines Arena at Hec Edmundson Pavilion. The Burke-Gilman Trail cuts through the intersection of Montlake and Pacific. Auto traffic feeds to the SR 520 bridge, bus routes span in all directions, and foot and bicycle traffic related to the UW and surrounding neighborhood is ubiquitous.

It is hard to imagine how it would be possible to fit a 156,000-square-foot transit facility into this already crowded site.

LMN accomplished this by going deep underground. The three-story “collector,” one of the largest interior volumes of space in the city, houses the escalators and elevators that move people from the platform level to either the street level or the overpass level, allowing pedestrians and bikes to access the UW campus without the necessity of crossing Montlake Boulevard.

The exterior the structure on the surface is a two-story glass building that provides transparent views of Husky Stadium, Lake Washington and the surrounding UW campus. The glass structure also feeds light into the upper portion of the main circulation chamber. This building connects to both the street level via an exterior stairway leading toward Husky Stadium and Montlake Boulevard, while the upper level opens to the pedestrian and bike overpass connecting to the UW campus and the Burke-Gilman Trail.

Elegance and beauty are found at every level of the project. The glass structure above ground is clean and crisp and does not impede the views of Husky Stadium, or intrude on the tight intersection, while the compound curves of the overpass are narrow and somehow enhance the intersection in a modernistic way rather than impose itself on the fabric of the already busy landscape.

Without question the geometry of the collection chamber in conjunction with the artist’s design representing the strata of the soil column from 100 feet below grade are the most interesting and stunning aspects of the station design.

The three-story underground collection chamber housing the escalators is not a rectangular box, nor is it shaped exactly as a parallelogram, rather it’s a combination of the two shapes that lead the eye to the intriguing artwork on the walls of the chamber.

Leo Saul Berk’s sculpture “Subterranean” consists of complex and stylized perforations cut into the metal wall panels of the collection chamber, suggesting the geographic make-up of the glacial till that layers the soil from the surface to the depth of the platform at 100 feet below ground. The walls are backlit, making the sculpture come alive. It is truly stunning, worth a visit to the station even if you are not planning to ride the train.

Art, form and function come together to create an experience at the station.

I left the station and walked along the Burke-Gilman Trail for a distance to where my son picked me up at an easy auto access point. As I walked the tree-lined trail on one of the first sunny spring days in Seattle, I though how idyllic and magical this place is. My second thought was that UW Station elicits that same feeling. Seattle is becoming a better place to live as this transit system matures.

Steve Mork is a local representative for a variety of custom architectural products, including LA-based Ceilings Plus, maker of custom perforated acoustical ceilings used in the UW Station and Sea-Tac Airport.