WSDOT finishing ‘The Rest of the West’ on SR 520

By JULIE MEREDITH and LARRY KYLE
Special to the Journal

A few weeks ago approximately 50,000 people helped the Washington State Department of Transportation celebrate the grand opening of the new state Route 520 bridge on Lake Washington.

Undoubtedly, most participants knew they were walking, jogging or biking across the world’s longest floating bridge. What they probably weren’t aware of was the long journey it took to reach that historic milestone, or the many steps that lie ahead to finish the highway’s reconstruction.

With SR 520’s enhanced Eastside segment completed in 2015 and the new floating bridge now open to traffic, our focus at WSDOT is fixed squarely on finishing the highway corridor’s improvements all the way to Interstate 5 in Seattle — a stretch of the construction program we call “The Rest of the West.”

Much work remains. But fortunately, the 2015 Legislature authorized the $1.6 billion in funding we need to rebuild the west side segment. And WSDOT already has in place an integrated team of in-house staff and experienced consultants — led by HDR — to manage the job ahead.

The long road to construction

Rebuilding a major highway within a densely populated, highly developed urban area — all while keeping the corridor’s heavy traffic flowing, day after day — is a highly complex effort, especially when it involves replacement of several long, over-water bridges. The work is somewhat akin to remodeling a kitchen while the home’s residents continue cooking, eating and washing their dishes in that room. The logistics are challenging.

Perhaps even more challenging for the SR 520 program, however, was achieving public consensus on the scope and design of the improvements we would make. A regional discussion of SR 520’s future, called the Trans-Lake Study, began back in 1997. The study looked at a variety of transportation options, including a cross-lake tunnel, commuter ferries, a new bridge between Sand Point and Kirkland, and four-, six- and eight-lane rebuilds of SR 520 (with or without high-capacity transit). A status quo, “no-build” alternative also was explored.

Nine years of community engagement and dialogue elapsed before a draft environmental impact statement was developed in 2006.

The draft EIS — and the supplemental and final EISs that followed — prompted study of several more slimmed-down options for SR 520. Meanwhile, state legislation directed a mediation process to limit the impacts of our project in Seattle, and to study other west side options. One, for example, involved moving the highway’s Montlake interchange to the Washington Park Arboretum, where a below-water-level interchange would connect, either by tunnel under Union Bay or by bridge, to Northeast Pacific Street near the University of Washington.

The many corridor design options analyzed for SR 520 have required close coordination between WSDOT and our expert consultants — 126 firms to date, including eight DBE firms representing nearly 15 percent of the program’s architecture and engineering budget. Our consultants span a wide range of specialized fields, including civil, structural and electrical engineering, air and water quality, geology, acoustics, chemistry, biology, anthropology, environmental science, and urban design, to name a few.

To enhance coordination and communications on a complex $4.5 billion program, WSDOT and HDR, our general engineering consultant manager, are closely integrated within a collocated office with many of our subcontractors. Together, we manage all key aspects of the program: engineering, planning, environmental, construction management, finance, communications, interagency coordination, risk management, cost estimating and claims management. 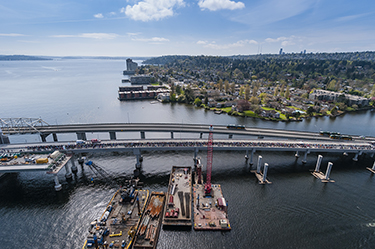 After more than a dozen years of extensive community engagement, studies and analysis, WSDOT ultimately recommended a six-lane preferred alternative for SR 520 from I-5 to the Eastside. Our plan, which the Federal Highway Administration approved as the blueprint for SR 520’s reconstruction, included:

• Corridor-long HOV lanes in both directions

• A regional bicycle and pedestrian path running the corridor’s length

• A second bascule bridge over the Montlake Cut

In 2011, with partial funding authorized at that time by the Legislature, we began rebuilding the highway’s Eastside segment (where local communities had reached early agreement on the planned improvements in their area). We also started building pontoons that year for the new floating bridge. And in 2014, following receipt of a $300 million federal loan, we began constructing one of two parallel approach bridges that will link Montlake with the new floating bridge.

Our corridor improvements for “the Rest of the West” remained on hold, however, pending the funding needed to complete that final segment.

We undertook a community design process in 2011-12 with our Seattle stakeholders and reached agreement on the conceptual designs for several corridor improvements within the city, such as an improved I-5 crossing for bicyclists and pedestrians, and the main features of a highway lid between 10th Avenue East and Delmar Drive. 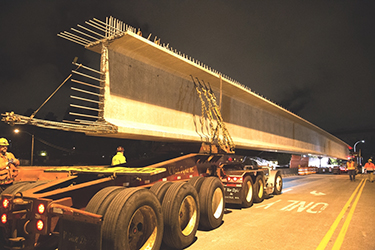 The road ahead in Seattle

From early planning sessions in the late 1990s to the myriad public forums of the 2000s to the latest design refinements of 2015, WSDOT and our consultants worked closely with the community to craft a practical vision for reconstructing SR 520’s west side corridor. Together, we produced a design plan that meets key public needs while limiting construction costs and stretching transportation dollars. Below are a few examples.

Narrower lanes and shoulders. Through practical design, the general-purpose lanes and inside shoulders of the new floating bridge, Portage Bay Bridge and west approach bridges were narrowed while still providing room for disabled vehicles, improving traffic safety and enhancing mobility. This not only saves millions of dollars in costs for concrete, steel and other bridge materials, but reduces the bridges’ environmental footprint.

Fewer bridge columns. The refined design for the two side-by-side, 1.1-mile-long west approach bridges reduces the number of in-water columns the bridges need. This refinement cuts by 40 percent the amount of concrete needed for the bridges — a cost savings as well as an aesthetic and environmental benefit.

Leaner Portage Bay Bridge. We worked with the community and Seattle Design Commission to select a lower-cost box girder design rather than a higher-cost cable-stay design. The adopted design involves two narrower bridge structures for eastbound and westbound traffic, with cleaner lines more appropriate for the surrounding area, and a managed-lane shoulder that can convert to a fourth westbound traffic lane during peak periods.

Next for Rest of the West 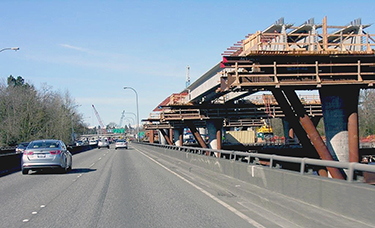 [enlarge]
All girders for the West Approach Bridge North are expected to be placed by year end.

WSDOT will be holding open houses, both in person and online, later this spring to share the latest information and receive public comment on design and construction plans for the Rest of the West.

We anticipate beginning construction in 2018, first on a Montlake lid and the West Approach Bridge South (carrying eastbound traffic to the floating bridge). Next, we’ll construct a new Portage Bay Bridge, Roanoke lid and revised I-5/SR 520 interchange. Construction of a second bascule bridge across the Montlake Cut will complete the west side project.

We expect to wrap up all work in the corridor by 2029.