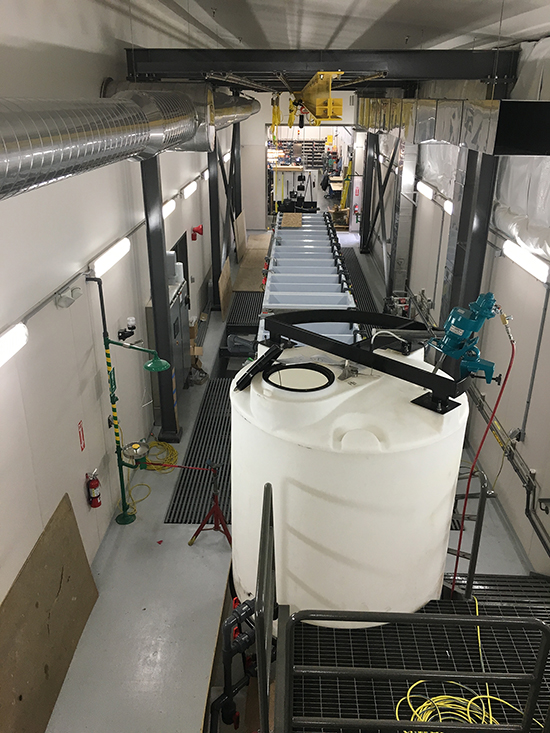 Photo from Donovan Brothers
The finishing line has fiberglass-reinforced plastic grating below the tanks.


In 2012, Donovan Brothers built the new manufacturing facility for Orion Industries in Auburn. When Orion decided to build a long-planned, in-house finishing line for chemical processing, anodizing and painting of aluminum parts, it again called on Donovan.

The new facility allows Orion to reduce flow time and control costs, as well as create a new training platform for its vocational programs in the local aerospace finish industry. Orion trains and places people with severe disabilities and those recovering from addiction for employment in manufacturing and aerospace industries.

Due to the complex nature of a finishing line, mechanical, fire protection, plumbing and electrical engineers were all brought on early in the design phase. Adding to the complexity, the finishing line itself had to be constructed of all non-corrosive materials, requiring the use of fiberglass-reinforced plastic beams and grating in lieu of steel I-beams and grating below the tanks. All ductwork and steel had to be stainless steel or finished in a corrosion-resistant epoxy.

In addition to the finishing line, a paint booth and oven were installed for additional types of finishes.

One challenge was building a large containment pit beneath the chemical tanks in case of material spillage or an event triggering the fire suppression system. The pit is adjacent to the building foundations.

Prior to excavation of the pit, the team coordinated with a pile-driving subcontractor to temporarily shore up all of the adjacent footings bearing the load of both the tilt-up panels and the roof using helical piles followed by driven I-beams and steel plates. Once the building was stabilized, excavation and construction were completed.

The pit was lined with a corrosive-resistant barrier welded together to encapsulate the entire containment area, then a sloping concrete slab and walls were poured using a concrete mix specifically designed to keep water and liquids from penetrating through either the walls or floor. After the concrete was finished, the floor and lower section of the walls were covered with an epoxy coating as a final barrier.

To maximize protection, all doors leading into the room contain stainless steel trenches and grating draining back into the pit. Structural components of the room include the epoxy-coated mezzanine, fiberglass structural members, and a crane hoist-way for lowering and removing items from the chemical line.

The final step of the project included extensive plumbing, electrical, and mechanical work to enable monitoring of all chemical levels in the tanks, temperatures of the chemicals and necessary mixing. An intricate network of plumbing, electrical and HVAC ducts run below the tanks to service the different functions of the system. Some tanks and chemicals required a hood both above and below to provide a constant de-misting air flow.

A mezzanine houses much of the equipment that runs the finishing line. There is also a significant amount of roof-mounted equipment.

Safety features include fire suppression in all the exhaust ducts and an emergency manual override of the system that is accessible on the outside of the building. Showers and other safety measures ensure worker safety in case of contact with chemicals.

Despite the complexity of the project, Donovan delivered it on time, within budget and with no injuries in the 1,956 hours worked.