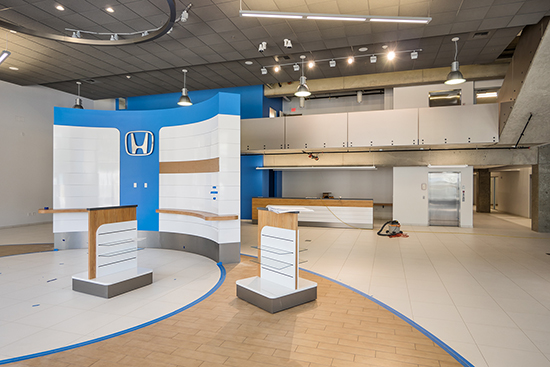 Photo by Fred Ueckert
This Honda showroom is on the opposite side of the dealership from the Toyota showroom.


Honda and Toyota of Seattle chose SKIS Painting to paint its 405,000-square-foot dealership.

Challenges were the building’s size, meeting an aggressive schedule with a set opening date, coordinating with different trades and working with two distinct color schemes: Honda blue and Toyota red.

SKIS used more than 500 gallons of paint and clear concrete sealer to complete the two showrooms, corresponding offices, service areas and exterior concrete panels. To maximize efficiency, paint was staged on rolling pallets at various points throughout the building.

The first task was to paint 804 brackets embedded in the finished and exposed concrete. SKIS lead painter and his assistant developed a plan that completed the task in less than half the estimated time.

The concrete parking garage columns were painted with multiple colors and cut lines were hand painted prior to installation of wire railings. Painters wore harnesses attached to anchor hooks embedded in the ceilings and used a 60-foot telescoping boom to access the columns.

The team coordinated with the Mercedes dealership south of the project to relocate several rows of cars less than 40 feet from the exterior work surfaces.

Completing the final finishes to the interior required detailed precision and planning. Each showroom had a unique color scheme, including different accent colors. Multiple scissor lifts were needed to reach the 30-foot ceiling on the Toyota side. Also, a high percentage of the 103 doors to be painted were to be finished in the same color as adjacent walls, a finish detail that took additional hours to execute properly.

Ultimately, the project finished on-time, under the original budget and with no medical or time-loss incidents in the 3,392 hours worked.