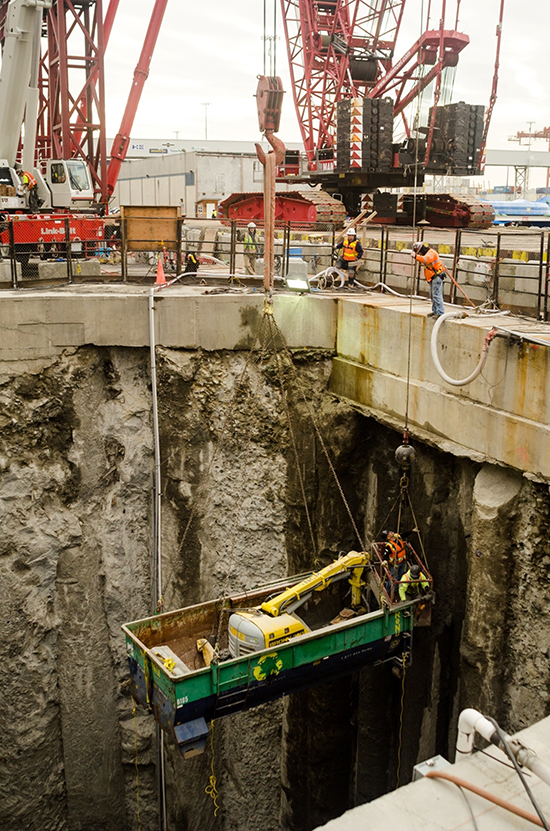 Photo from Northstar CG
A debris trailer was retrofitted into a platform to support a demolition machine inside the rescue pit.


STP contracted NorthStar to cut and remove more than 10,000 tons of concrete at the south tunnel launch pad, but the scope of work increased after the tunneling machine named Bertha sustained damage from a steel pipe in her path, requiring a rescue pit to be dug.

As STP began the drilling and excavating required for the rescue pit, it discovered nine free-standing concrete pile columns that needed to be removed in order to free the machine’s cutterhead. STP worked with NorthStar on a plan that would result in the safe demolition of these 120-foot piles and allow access to the damaged machine.

Since the work was to be done at up to 120-foot elevations within the recovery shaft, safety was given the highest priority.

NorthStar and its partners decided to perform wall saw separations between all nine concrete piles, effectively separating them from the pile walls that needed to be left intact, minimizing the possibility of unexpected breaking or cracking. The sawcutters operated from 90-foot boom lifts to cut from the base of the piles up to the boom’s maximum safe reach, then were suspended in baskets from overhead cranes to cut the final 30 feet up to the top of the shaft opening.

Once the separations were in place, NorthStar lowered remote-operated Brokk demolition machines in a custom rigged platform alongside a basket containing the operator. Using the robotic breaker, the operator systematically demolished each pile with precision. These piles were not only free-standing, but void of any internal steel rebar support, which increased the risk of the piles breaking in unplanned patterns.

The engineering was effective and accurate, resulting in the saw cut separations providing the anticipated relief to the concrete joints and enabling the piece-by-piece demolition of each pile.

Once the piles were broken down, a crane was used to lower a track hoe with a breaker to punch out the relief line in the wall, creating space for Bertha. This relief break allowed Bertha’s damaged cutterhead to emerge through the wall and ultimately be lifted out for repairs.

One of the challenges of this project was that the equipment needed for this unique demolition had to be engineered and developed quickly. A steel debris trailer was retrofitted into a platform with the necessary rigging to support the 10,000-pound demolition machine. An operator had to be suspended more than 100 feet in the air and maneuvered within a few feet of the machine and the breaking bit in order to apply the breaker to precise locations.

All of the challenges required collaboration with STP, structural engineers, equipment manufacturers and crane operators in order to meet all safety regulations and ensure workers’ safety. Throughout the project, NorthStar focused on scheduling, timing and overall cost, since it had to complete its original scope and schedule at the south launch pad throughout the rescue project while maintaining the original budget. Field crews worked under constant pressure of media coverage and intense involvement of SDOT and WSDOT officials.

Even with the complexity and tight schedule this job was completed on time. There were no medical or time-loss incidents in the 129 hours worked.