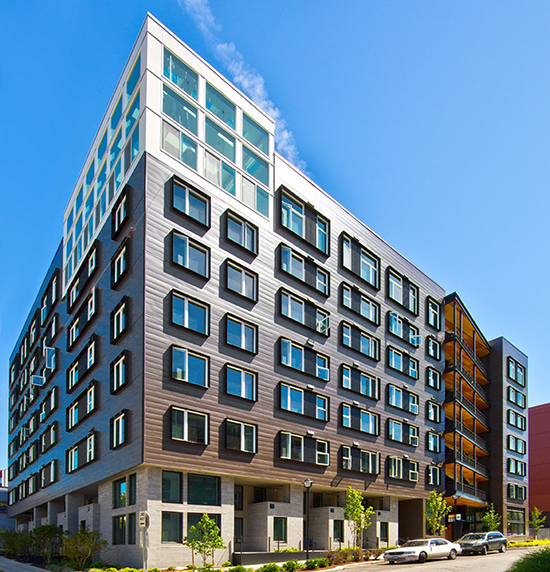 The building has 112,000 square feet of high-end apartments above two levels of underground parking. During preconstruction and value engineering, Rafn reduced the project cost from more than $2 million above the owner’s budget to $125,000 below it. The Rafn team saved money by using:

• Horizontal venting instead of vertical, which also improved energy performance

• Hardie siding instead of metal for the alley facade

Rafn also devised a streamlined version of the shadowboxes that frame the building’s windows, achieving the architect’s design goal at half the original cost.

Construction began before the design was complete, so Rafn continued to refine project components and systems to fit the budget.

When a backhoe operator discovered a mammoth tusk at the bottom of the excavation, the project’s schedule could have been adversely impacted. However, Rafn’s superintendent immediately secured the fossil, took steps to ensure the safety of paleontologists who came in to preserve and remove it, and changed the work flow to keep the project moving.

The tusk, named LuLu in a community competition, became a key element in the identity of the project. The tusk is now at the Burke Museum in Seattle.

• Diverting 75 percent of waste from landfills

• Using reclaimed wood from the previous building, a chocolate factory, in the common areas

The site is adjacent to a day care, so Rafn took precautions to ensure the children’s safety in a play area. The south elevation was draped with heavy protection mesh to ensure that if construction materials fell, even from the highest floors, they would be contained on the project site. Additionally, potentially dangerous activities were scheduled at times when children were not present.

To create a safe working area around the exterior of the building, Rafn pushed adjacent power lines out and away from the poles.

Weekly safety meetings, safety audits and traffic control plans for the heavily traveled area also contributed to keeping the jobsite safe. Despite the tight site and heavy traffic, there were no medical or time-loss injuries during the 41,489 hours worked on the project.