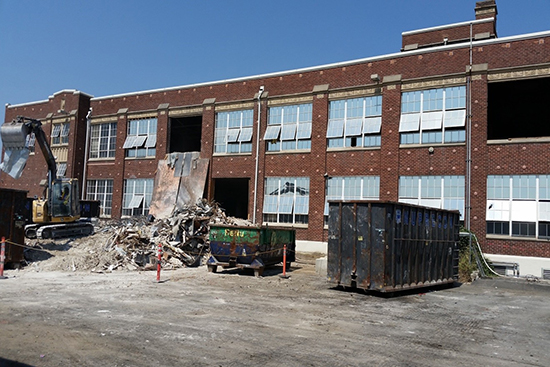 Photo from NorthStar CG
The historic facade was retained at McCarver.


Recorded on both the Tacoma and Washington state historic registers, Stewart and McCarver schools had not had major renovations since they were built in 1924.

In preparation for a long-anticipated complete renovation, new construction and critical structural upgrades, NorthStar performed select demolition to retain the historic facade and design finishes, while bringing the entire interior down to the structure.

Skanska, the general contractor, needed a blank slate for the interior work but specific design elements from the original building had to be preserved. The interior was replete with sweeping Gothic and Greek revival architectural style accents, ranging from Corinthian column caps with their iconic whorls and scroll work to vaulted pediments and crown molding.

The team’s first step was to remove and abate hazardous materials. It developed an innovative shoring design that enabled it to methodically demolish structural elements while keeping the facilities safe for subsequent trades.

The work was as much about preservation as it was about demolition. Original finishes and materials were diligently protected throughout every phase of work and 92 percent of the 10,000 tons of debris was diverted from landfills and recycled.

NorthStar removed the original school logo from the 91-year-old center court gym floor for use as a design element in the new facility.

The Stewart and McCarver projects presented unique challenges and required careful collaboration with the entire build team. The structures could only support a limited weight and scheduling required using machinery for demolition. To navigate this challenge, NorthStar partnered with KPFF Consulting Engineers to evaluate structural floor load ratings and develop material and equipment movement plans, ensuring both safe and efficient demolition.

In the basement of the Stewart building, NorthStar excavated three areas for new footings, which required unique designs. KPFF assisted in the design of several custom shoring systems that could support the structure above and maintain structural integrity while enabling the new concrete footings to be poured into place.

To meet the demands of a tight budget, demolition crews and hazardous material abatement crews worked together as those scopes had to be performed simultaneously. Equipment and crews were mobilized to each school based on each site’s daily needs.

The close proximity of the sites and tight collaboration of NorthStar superintendents led to the sharing of costly equipment, which ultimately resulted in these projects remaining within their budgets and completing on time. There were no medical or time-loss incidents in the 35,427 hours worked.