Tapping stormwater runoff as a resource

Identified as the leading cause of contamination in Puget Sound and other surface water bodies across the state, stormwater runoff has long been viewed as a problem. Solutions have focused on limiting development, implementing new regulations, and constructing detention and treatment systems. These traditional approaches can be costly, incompatible with economic development, and often contrary to effective resource management.

In the meantime, streams are running dry during the summer and groundwater levels are dropping in many areas across the state. With population increases and loss of late season snow pack due to climate change, these problems are predicted to increase.

Viewing stormwater runoff as a resource rather than a problem may be a better approach.

Two strategies for managing stormwater runoff as a resource include stormwater infiltration and rainwater harvesting. Both approaches reduce stormwater runoff and discharge of contamination to surface water. In addition, infiltration is effective in raising groundwater levels and helping to maintain stream flows that protect fisheries. Rainwater harvesting can reduce reliance on public water supplies, providing cost savings to the owner and the public.

How did it become a problem? 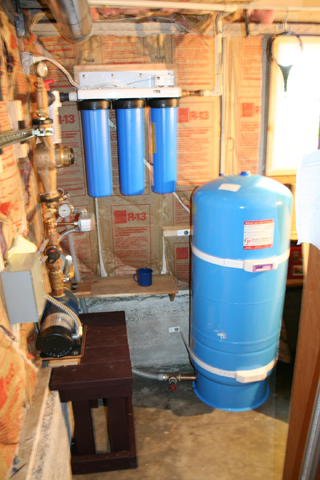 Pre-1980, Puget Sound-area stormwater systems were designed to collect and deliver stormwater to surface waters (streams, lakes, Puget Sound) as quickly as possible. Over time, this practice resulted in flooding, contamination of surface water bodies, and reduced stream flows in the summer. To alleviate these impacts, new regulations were put in place that required treatment and detention of stormwater runoff for all new development. In addition to requiring huge infrastructure investments, there is growing evidence that these approaches are not sufficient.

In many urban settings, stormwater runoff was combined with sewage discharge to avoid a dual pipe system, and treatment plants have been constructed to treat the combined effluent. During heavy precipitation events, treatment plant capacity is frequently exceeded and raw sewage is released directly to surface water (referred to as combined sewage overflow or CSO).

Since environmental issues resulting from combined sewage overflows have been recognized, municipalities have spent millions of dollars to reduce the frequency and volume of these overflows. The city of Seattle is working on about $330 million in sewer system upgrades, all financed by the rate payers.

Encroaching development has resulted in removal of forests and construction of roads, parking lots and buildings that all generate stormwater runoff. Precipitation that once fell on forested land and recharged groundwater is now routed to pipes and detention facilities before discharging to surface waters. If some or all of this stormwater runoff can be infiltrated instead, significant benefits can be achieved: reduced pollutant loading; increased stream flows during dry summer months; and increased groundwater levels. 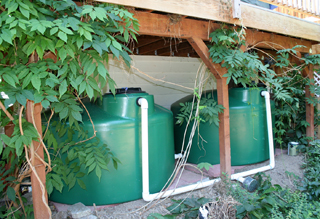 Hoping to realize these benefits, Kitsap County has embarked on a program to increase stormwater infiltration by modifying existing stormwater detention ponds. Originally designed to temporarily retain stormwater runoff during peak storm events, some of the ponds were located in areas with permeable soils near the ground surface. Through relatively simple and inexpensive modifications — such as removal of several feet of low permeability soil in the bottom of the ponds — the infiltration capacity of the ponds was substantially increased.

Since most stormwater contaminants (petroleum, heavy metals and pesticides) are either retained on soil or treated by naturally occurring bacteria found in soil, Kitsap County’s program to increase infiltration of stormwater is reducing contaminant loading to Puget Sound.

During extended dry periods groundwater discharge is the only source of stream flow. Maintaining stream flows during summer months is critical for survival of salmon and other fish species. Since infiltrating precipitation moves slowly through the subsurface, the lag time between stormwater infiltration and discharge to streams is typically on the order of days to months. The lag effect promotes higher stream flows during summer months.

A typical rainwater harvesting system collects runoff from roofs and stores it in a cistern, either above or below ground. With no treatment, the water can be used for watering vegetation. Minimal filtration allows the water to be used to flush toilets. Potable water use requires more involved treatment.

The amount of water saved with a rainwater harvesting system depends on a household’s water usage, the size of the cistern, the amount of roof area, and the amount and timing of precipitation.

A simple model was created to simulate cistern operation based on daily rainfall records for Seattle between 1990 and 2000. This time period included both dry years (29 inches in 1993) and wet years (51 inches in 1996). The model assumed a roof area of 1,500 square feet, a cistern volume of 2,000 gallons, indoor water use of 145 gallons per day, and typical outdoor watering rates. Assuming the harvested rainwater was used for irrigation and all indoor use, runoff from the property would be reduced 85 percent and use of public water would be reduced 52 percent.

According to Nikola Davidson with EarthSystemsNW, the typical cost of a small cistern (less than 2,000 gallons) is $1,500 to $5,000 (including installation) and the typical cost for a potable water treatment system is approximately $8,000 to $10,000.

Widespread implementation of rainwater harvesting systems could also significantly decrease combined sewer overflows in the city of Seattle. For the 10 highest precipitation events between 1990 and 2000, the daily runoff volumes were modeled to decrease 145 to 1,825 gallons for the residential scenario described above. Multiply these volumes by 155,000 Seattle households and the runoff associated with these storm events would be reduced 22 million to 280 million gallons. This is substantially greater than the 20 million gallons of control volume storage contemplated by the city of Seattle for combined sewer overflow and would potentially eliminate the need for this storage.

The city of Seattle has recognized the potential benefit associated with rainwater harvesting and has included it in its Residential RainWise Program for managing storm water at home. The pilot program is providing financial incentives for homeowners in the Ballard CSO basin to install cisterns.

Scott Kindred is an associate water resources engineer with Aspect Consulting who specializes in the design and implementation of stormwater infiltration systems. He has more than 20 years of consulting experience, providing creative multi-disciplinary solutions related to site development, environmental remediation, infrastructure and mining.