Washington state is home to the most stringent, enforceable limitations on stormwater discharges in the country. For construction site operators, compliance often means implementing a stormwater treatment system and committing to regular site monitoring.

Until a decade ago, the only stormwater treatment options available were chemical processes that involved multiple steps, became ineffective when site conditions changed, and were unable to treat large volumes of water. Many of these processes also proved toxic to aquatic organisms.

The electrocoagulation process was introduced to the construction industry as a solution for stormwater treatment in 1999 in the form of WaterTectonics’ WaveIonics Electrocoagulation Subtractive Technology (ECST). A non-chemical, one-step water treatment process, WaveIonics ECST is effective in reducing turbidity and controlling pH levels. The electrocoagulation process is based on proven scientific principles involving responses of water contaminants to strong electrical fields and electrically induced oxidation and reduction reactions. The resulting effect causes particles and pollutants to separate from the water.

In 2001, the Department of Ecology initiated a rigorous testing process requiring water treatment systems to prove their effectiveness in meeting the state’s discharge limits for turbidity and toxicity to aquatic organisms. To date, the only two treatment methods meeting these strict criteria are chitosan-enhanced sand filtration and WaveIonics ECST. 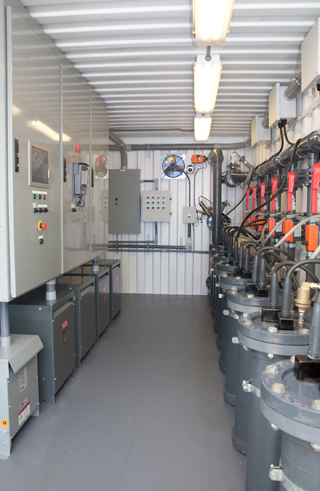 Photo courtesy of WaterTectonics [enlarge]
The WaveIonics system is housed in a 20-foot box for weather protection and operator safety. This one processes 300 gallons per minute.

ECST is an automated water treatment process that cleans between 100 to 1,000 gallons per minute for the purpose of reducing turbidity and controlling pH on construction sites. The system optimizes the treatment process in response to changing influent water parameters while eliminating the need for an onsite operator in most cases. This automation combined with the system’s small footprint and quick connect/disconnect function for electrical and hydraulic lines reduces set up and mobilization time, which results in lower labor and material costs.

First used by WaterTectonics in a commercial setting on a Microsoft construction site, ECST effectively reduced turbidity and controlled pH, enabling the client to meet or exceed both state and local requirements. Over the next eight years, the WaveIonics system was used to treat and discharge water on more than a dozen additional Microsoft construction sites in the Seattle region. Stormwater treated on these sites was released directly into Lake Washington and Lake Sammamish.

The WaveIonics ECST remains a go-to system for high-volume construction projects in the greater Seattle region, including those discharging to Western Washington water bodies with sensitive ecosystems, such as Puget Sound, Lake Washington and the Columbia River. The system has also been used as a permanent industrial stormwater treatment solution at multiple facilities across Washington and Oregon. Additional high-profile construction projects in the greater Seattle region that have effectively used ECST include the Virginia Mason Athletic Center in Renton and St. Anthony’s Hospital in Gig Harbor.

Last March, WaterTectonics was granted General Use Level Designation from the state Department of Ecology for ECST. The WaveIonics system is one of only two approved methods for treatment of stormwater runoff on construction sites in the state. The approval makes ECST more broadly accessible statewide.

In response to the state’s approval of ECST and the resulting increased availability of the WaveIonics system, WaterTectonics is in negotiations with the Associated General Contractors to train members and non-members on the operation of ECST systems in construction applications. The course would certify AGC members to operate an ECST system and other approved stormwater treatment systems.

In addition to turbidity and pH control in construction applications, ECST is also effective for removal of total suspended solids, total and dissolved heavy metals, oils and fats, nutrients and bacteria. In industrial applications, the use of ECST spans diverse industries, from shipbuilding to wood treatment, scrap metal recycling, and oil and gas applications.

A West Coast scrap recycling company tested water treatment systems for more than a year before selecting the WaveIonics system to remove heavy metals such as zinc, copper and lead from stormwater before discharging it into the Columbia River. A second company, ExteriorWood, a leader in the pressure-treatment industry, also used the system to remove copper so it could discharge stormwater runoff into the Columbia.

As ECST continues to evolve, it is being proven effective for water treatment in increasingly diverse applications. With future research and exploration, electrocoagulation may be the answer to preserving and maintaining the integrity of our world’s most precious resource.

Jim Mothersbaugh is founder and president of WaterTectonics, an Everett-based company specializing in onsite water treatment technology and services.