Often people are drawn to environmental consulting out of desire to balance a healthy natural environment with the need for commercial and industrial development. As professionals, they serve a vital need in sustaining and restoring our natural assets, but sometimes, these people choose to make a difference at a grassroots level through volunteer engagement.

For Chip Halbert and his family, the perfect mix of ecological knowledge, a motivating desire to serve and strong commitment to preserving the world in which we live, stirred them to put down roots in the Indian Himalayas for two years.

Chip, an environmental engineer with Landau Associates for the past 12 years, was serving as director of environmental permitting and natural resources when he and his family made the decision to relocate to India in 2008.

After taking a trip to India a few years before, he and his wife were impressed by both the need for growth in rural areas, specifically economic development, and the collaboration among people eager for change. Chip says, “We wanted to help preserve what we have in the world, and find opportunities to help make it a better place.” 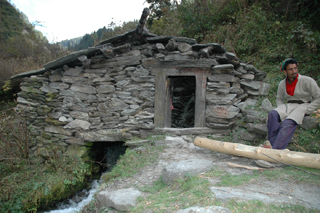 Photo courtesy of Chip Halbert [enlarge]
A grain mill on a small river has the potential to become a micro-hydroelectric power source.

Chip talked about his plans with Landau Associates’ management team, and they were very supportive as the company has a strong commitment and long track record of encouraging its employees to reach out, get involved, and give back to people and the environment.

Landau Associates retained Chip on a part-time basis, allowing him to provide senior technical reviews for several projects from wherever his travels might take him.

“It was a real win-win,” Chip explains. “The reduced salary was still enough to cover our expenses in India, but it also gave us enough flexibility in our schedule that we could commit our time and our energies to the community we were living in.”

Chip, his wife Sandy, and their three children packed up their lives here and moved 8,000 miles away to their new home in Mussoorie, Uttarakhand, in the northern part of India. This small town is tucked away in the lower Himalayas at an elevation of 7,000 feet. All around them lay dense rainforest, thick with oak and pine trees and inhabited by exotic wildlife such as leopards and monkeys. Instead of clean paved roads and sidewalks, they trekked through muddy footpaths to get from place to place, sometimes sharing the same path as nomadic buffalo herders.

Chip and his family didn’t set out with a clear plan for how they could make a difference in India. Opting against volunteer opportunities tied into any specific organization, they chose to simply go as tourists and help out wherever they could.

After spending the first few months intensively studying Hindi, the opportunities to help came naturally. As they got to know people locally and became more immersed in the day-to-day living experiences in this small town, the opportunities grew and the needs became evident.

People in nearby villages were concerned and frustrated by the unstable water supply and asked Chip if there was a way they could recycle rainwater from their roofs. Chip taught them about the benefits of using sand filters to reduce water contaminants and provide potable water. He then designed several sand filters, which allowed them to harvest rain from the rooftop runoffs.

Managing the water supply in India has been a significant struggle for hundreds of years. The state became the sole provider of water in the 19th century, which meant communities were no longer the primary agents of water provision and management.

The use of rainwater and floodwater declined and in its place the state grew to rely on surface water, primarily rivers and groundwater. Over time, the usage level of river water has significantly depleted many of India’s river basins and led to considerable river pollution. The groundwater supply has been heavily over-used, leading to depleted resources.

Overall water supply throughout India, in terms of quality and quantity, has declined to such an extent that in many parts, both rural and urban communities hang in a precarious balance, facing drought-like situations regularly.

“Any time someone heard about my background in environmental engineering they were eager to learn more because the needs are so apparent in that part of India,” Chip says.

Environmental regulation is in a relatively early stage there. Much of what’s happening with recycling, municipal waste management, and so on, is happening at a grassroots level. In Mussoorie, it is largely private citizens and schools introducing change and making improvements.

One of the interesting dialogues during their two years in India grew out of a chance introduction. While celebrating Christmas on the beach in Goa, more than 1,300 miles from Mussoorie, Chip met Scott Smith over dinner with mutual friends.

Chip had backpacked through remote areas of the Himalayas in Uttarakhand, places well off the electrical grid but with thriving village communities near creeks or small rivers. Chip had been giving a lot of thought into the potential for using micro-hydroelectric projects to provide power to those communities when he happened to meet Scott.

With Scott working as the director for economic development in that region, he and Chip began to brainstorm about some overlapping elements of the economic and environmental fields.

Micro-hydroelectric installations can produce up to 100 kilowatts of power for isolated and/or smaller communities. These installations offer these communities an economical way to access a form of renewable energy without needing to buy fuel. They produce no greenhouse gases and provide an alternative to other traditional energy sources that contribute to global warming. As such, hydroelectric projects can often qualify for the registration of carbon credits.

Although an individual micro-hydroelectric power plant would be too small to warrant the effort of pursuing registration of carbon credits, Chip recognized an opportunity for the state to combine several individual projects into one larger project plan that could register carbon credits and sell them on the international market to help offset the costs of constructing the micro-hydroelectric plants.

After that initial chance meeting, Chip and Scott had several follow-up conversations to consider how GTZ and the Uttarakhand government might implement such a program. Chip returned home to the U.S. before any solid plans were developed, but the idea was planted and there is hope that GTZ will continue moving forward with the plan.

“We don’t always get the chance to see a plan carried out through its end,” Chip says. “Sometimes planting the idea and helping it get through its first formative stage is the only chance we get.”

The Halbert family returned to the Puget Sound area in June and Chip is back working full-time in the Edmonds office of Landau Associates as the lead for air-quality permitting and risk assessment projects.

The time that Chip spent in India brought with it new perspective and a renewed passion to his projects.

“India is such an incredibly diverse place and its people are wonderfully resourceful,” he says. “Seeing that creative resourcefulness play out in daily life has really reinforced for me that there are so many different and viable solutions to any need at hand.”