Industry once claimed the waterfront of most cities. Refineries, rail yards and manufacturing facilities that depended on proximity to water transportation were built on the foreground of the cityscape. This remnant of industrialization physically and visually disconnects people from the unique places that define waterfront cities.

Now these once degraded landscapes are being reclaimed. An approach called urban ecology, based on landscape and ecological systems, is helping planners to reconnect the public to the waterfront.

Increasingly, urban waterfronts are being designed in balance with natural processes to create vibrant communities that function sustainably while supporting the remaining uses of working waterfronts. 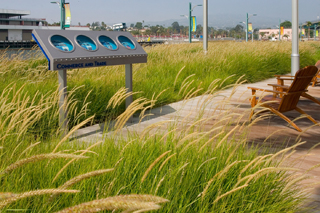 Image courtesy of Dixie Carrillo/Aecom [enlarge]
Native grasses replace over an acre of asphalt at the Los Angeles Cruise Ship Terminal. These grasses have created environments for local fauna along with an interpretive space for residents of the shared environments at the water’s edge.

Resilient waterfronts can be rediscovered from the remains of vacant industrial land. Guided by robust environmental protection and enhancement, sustainable urban renewal, and innovative planning and design, degraded sites can become a focal point of waterfront cities, spurring economic revival and community growth.

With changing economies and adapting industries, many companies have moved or consolidated from waterfronts to other locations, resulting in abandoned, environmentally damaged and underused sites that are in desperate need of revitalization. Riparian, shoreline and aquatic ecosystems that once characterized the waterfront are barely recognizable, and their function is only a fraction of what it once was for the ecosystem as a whole. 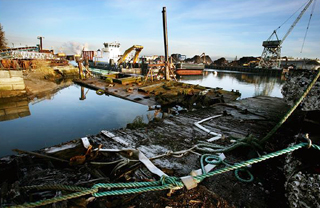 Image courtesy of Aecom [enlarge]
On behalf of the Lower Duwamish Waterway Group, Aecom is evaluating options for remediation of contaminated site sediments.

The regulatory environment has evolved and support for brownfield redevelopment has significantly improved. The Environmental Protection Agency’s Brownfields Initiative and the state’s Voluntary Cleanup and Brownfield Program have enabled a viable means to re-use these properties. With careful land-use planning and appropriate redevelopment options, turning brownfields green is an increasingly safe and profitable enterprise.

By integrating site planning and design with environmental cleanup, our most spectacular pieces of land can be successfully redeveloped. Beyond the ecological benefits, redeveloping infill sites reduces the demand to develop new sites, slows urban sprawl and allows other undeveloped sites to be preserved as habitat and open space.

With careful consideration of both natural and built infrastructure, environmental sustainability can be designed into urban redevelopments, resulting in community revitalization through the creation of housing, tourism and job creation. 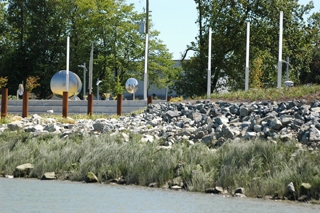 Image courtesy of Todd Bronk/Aecom [enlarge]
The Richmond, B.C., urban waterfront uses former industrial land to extend the downtown to the water, re-establish natural ecologies along the river’s edge, and mimic natural forms in design to respond to the sea level rise as a result of climate change.

Structuring the built form around open space and natural systems rather than intervening in restored environments celebrates the health, vitality and livability of a waterfront’s community for generations to come.

At a waterfront scale, the interface between existing urban fabric, proposed development and the reestablishment of environmental networks requires a collaborative approach between design disciplines, engineers, ecologists, planners and the public. Providing opportunities for sustainable industry and commerce that support elements that make up a lively public place, such as markets and civic gathering spaces, ensures that a waterfront attracts people at all times of day and seasons.

Cities such as Richmond, B.C., and Los Angeles have already begun to integrate urban ecology and design to turn industrial waterfronts into vibrant communities.

The city of Richmond proposed to redevelop industrial waterfront lands into a new urban edge along the Fraser River. Created for the 2010 Winter Games, the water’s edge was carved into more natural forms to protect the downtown from future sea level rise and provide direct public access to the water. The design also restored riverine ecologies in the lowlands and uplands.

Waterfronts are dynamic on every level and will continue to change over time. Applied urban ecology is vital to the process of waterfront industrial site regeneration. Through foresight and intentional placemaking, industrial waterfronts can be systematically transformed into adaptable and celebrated community spaces.

Newton Breiter, LEED AP, is a landscape and urban designer in the Seattle offices of Aecom Design + Planning.