While the digital age has fostered enormous conveniences that benefit our lives, it has also created impacts that threaten public health and the environment. Each year, more than 100 million computers, monitors and televisions are rendered obsolete and become what has been termed “e-waste.”

E-waste, which contains substantial levels of toxic chemical compounds and metals, is usually discarded, ending up in landfills and dump sites. Lawmakers across the country are struggling to address what should be done to minimize the environmental impacts associated with the disposal of items like monitors, televisions and computers. Perhaps most importantly, lawmakers are struggling to determine who should pay the costs for protecting the environment and individuals from the possible effects of e-waste.

In 2006, Washington became the fourth state to pass legislation to address e-waste disposal. The Electronic Waste Recycling Act required the Department of Ecology to institute a program to handle consumer disposal of monitors, computers and televisions. Under Washington’s program, the Legislature followed the trend set by two other states: it required funding from manufacturers.

Washington created a default program for electronics recycling, charging manufacturers a fee based on market share and collection share. Manufacturers can opt out of the default program if they provide their own plan for collection, transportation and disposal, and if their plan is approved by Ecology. 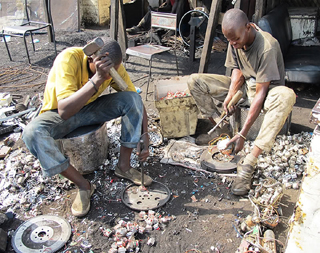 The default program in Washington began in 2009. Currently, manufacturers are unable to sell computers, laptops, monitors or televisions in Washington unless their products follow the default or another approved program.

According to a study released by the Northwest Product Stewardship Council in March, the first year of operation yielded 38.5 million pounds of e-waste in Washington, more than 5 pounds per capita. The state has 230 collection sites, many of which take advantage of preexisting resources. It is also estimated that 79 new jobs were created in Washington relating to e-waste in 2009.

Oregon’s law is very similar to Washington’s. Both programs began in 2009 and both had per capita collections above 5 pounds.

Maryland’s and Maine’s programs — both manufacturer-responsibility modeled but different than the Washington and Oregon model in implementation — had lower per capita collections. In 2007, Maine had a collection of 3.5 pounds per capita and Maryland 1.8 pounds.

The California model is consumer driven, and not a manufacturer liability model. Under the California program, the state collects the recycling fee ($8 to $25), which is used to reimburse recyclers and collectors who submit receipts that show they have collected e-waste for recycling.

California’s program began collecting e-waste well before Washington’s. In 2005, the year California’s program began, only 1.8 pounds per capita of recycled e-waste was collected. In 2007, that number had increased to 5 pounds per capita and currently is thought to be higher. At the time, the success of the program in California appeared to be greater than the results in Maine — the first state to pass legislation on e-waste. 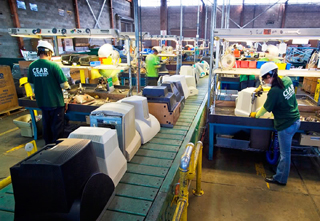 The high results in the first year of the Washington and Oregon programs suggest that obtaining funding for e-waste regulation from manufacturers is a viable and successful model. There are, of course, variables in reaching this conclusion. Substantial amounts of e-waste were already being recycled in these states and residents were used to seeking recycling programs. Also, more products become obsolete each year — the difference in the amount of e-waste per capita is most certainly more in 2009 than in 2007 when other programs began. Despite these variables, the program appears to be a success.

There is great incentive for the remaining 29 states to implement legislation on e-waste, as there are substantial dangers in allowing the open-market to continue handling the e-waste burden. In August 2008, a Government Accountability Office study found that while some exported e-waste ended up being properly and safely handled, recycled and disposed, a substantial quantity was being sent to countries that improperly handled and disposed of the e-waste in manners that were dangerous to the environment and human health.

In November 2008, the television show 60 Minutes sought to answer what seemed like a simple question: Where does your old computer monitor go? It sent a CBS camera crew to follow a crate of monitors and computers “recycled” with a supposedly environmentally friendly electronic waste recycling company.

The crew’s journey ended in a small town in China where the residents inhabit what can only be described as an electronic wasteland. People were paid to dig through the mounds of electronics and remove the reusable parts.

The episode, “Following the Trail of Toxic E-Waste,” described the blood of the local children as laced with lead and the show focused on the victims of fraudulent acts spawned by American good intentions. The images were haunting.

The concern continues across the globe. Last month, The New York Times Magazine published a photo of children standing in a similar electronic wasteland in Ghana.

Although the Electronic Waste Recycling Act that was passed by the Washington Legislature originally prohibited the export of e-waste to certain other countries, Gov. Christine Gregoire vetoed this provision because of federal preemption restrictions. In her veto message, Gregoire directed Ecology to promulgate rules for a convenient, safe and environmentally sound system for collection, transportation and recycling electronic products that could regulate situations like the one shown in the 60 Minutes episode.

While the export language was vetoed, the Washington law allows for annual audits for approved recyclers to ensure that collections from the program do not end up in the towns of China and Ghana impacting the health of children.

More and more, the manufacturer cradle-to-grave approach to dealing with the negative externalities of products is taking hold in legislatures. Four years ago, there were only 16 states with any law requiring a manufacturer or producer to remain responsible for any product through its complete lifecycle. These laws included electronics, packaging, plastics, carpeting and pharmaceuticals. There are now 31 states with at least one such law on the books. Many of the laws, however, have not yet been implemented.

As has been the case in Washington and around the country with e-waste collection programs, manufacturer responsibility programs and laws take time to implement. It is likely that as these laws are implemented and more manufacturer-responsibility laws are passed, more and more eyes will be on the Washington e-waste legislation and program. It is also likely that if national legislation emerges, leaders will look to the success of implementing Washington’s law in determining which model is most effective.

Jamila Johnson and Lawrence Costich are attorneys at Schwabe, Williamson & Wyatt in Seattle.