Vegetated roofs, walls and land together make a “green skin,” a system that integrates the built with the natural environment. In other words, green skins include streetscapes, open spaces, rooftops and exterior walls of constructed environments. This term is mostly used to describe a single building or group of buildings, but it can include the entire vertical and horizontal landscape of the built environment. That is a lot of surfaces and systems, all connected through the invisible movement of elements such as air and water.

Green skins frame spaces for living, working and recreating while also providing supportive habitat for insects, birds and animals. The concept of green skin provides a framework to consider the full range of consequences associated with planning and designing built environments, and evaluating maintenance requirements and longevity. In the Puget Sound area, much of the early efforts and pilot studies have focused on green roofs.

In Seattle, vegetated or green roofs of all types are being installed for a variety of purposes, such as stormwater management and urban farm space. From plaza-covered parking garages to rooftop terraces, the creative design of green roofs has lent itself to making some wonderful places to visit. 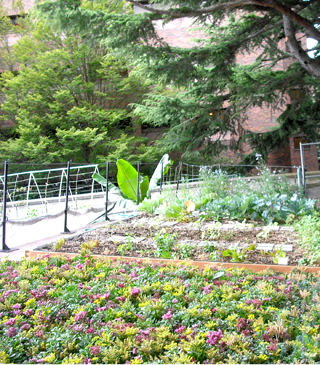 One of the earliest green roofs in Seattle is Freeway Park, designed by Lawrence Halprin and opened in 1976. This thriving project is a 5.2-acre planted concrete lid that hovers over Interstate 5 and connects Sixth and Ninth avenues, as well as Union and Spring streets. Similarly, green walls have been around for a long time and range from ivy-covered brick to modern felted scrims.

According to Green Roofs for Healthy Cities, the benefits of green skins are not limited to aesthetics. Vegetated surfaces buffer heat from the sun, using the sun’s energy to convert carbon dioxide into oxygen for us and chemical energy for plants. A side-benefit of this carbon and oxygen exchange is a reduction in the air’s temperature through evaporation of water from the surface of plants.

From Scandinavian sod roofs to rooftop gardens in the Mediterranean, vegetated roofs have long been used as low-budget, efficient roofing materials, and as places to relax and rejuvenate, grow food and escape. Historically, green roofs were placed on buildings designed with the weight and utility of the rooftop in mind, such as the Icelandic sod roof. Many of the structures built in the 1800s using this stone, sod, and turf method are still around today.

Modern materials and technologies include layers of waterproof roof membrane, perforated plastic for drainage, absorptive material, light-weight growing medium, and plants. This multi-layered approach represents a stark contrast to the traditional Icelandic design that used simple local materials and engineered the building to meet the heavy structural loads required of the sod roof.

Today, research on efficient and economically viable approaches is being conducted by universities, engineering firms, roofing companies and not-for-profit groups. For example, the Green Futures Lab at the University of Washington is conducting research into several thin (about 4 inches) green roof typologies, using a variety of layering and planting techniques. Additional research has been conducted by the Green Skins Lab at the University of British Colombia, the Washington State University Low Impact Development Stormwater Program and local consultants.

This cross-section of research entities represents an interest in green skins that is both broad and deep. In this research, general objectives vary from assessing stormwater management capabilities and energy savings to native habitat restoration and productive urban farming approaches.

A soon-to-be-published Seattle Public Utilities’ study found that well over 50 rooftops (equal in area to nearly 10 football fields) have been designed or converted to vegetated rooftop space within the past 30 years, with more than half of them constructed within the last three years.

In conjunction with this research, the city of Seattle has developed a green roof program to provide technical assistance and financial incentives for future projects. As a part of this program, an increase in urban agriculture on green roofs is also on the rise. For example, farming is conducted on the rooftops of Bastille, a restaurant in Ballard, as well as the M Street Apartments and Remmington Court townhomes.

Green walls, which apply the green roof technology in a vertical format, are increasingly seen as an additional building amenity for both aesthetic and energetic reasons. Green walls are an up-and-coming feature of Seattle green skins and are primarily featured indoors in private residences and upscale restaurants. However, a vertical garden was recently completed at the Goodwill-Milgard Work Opportunity Center in Tacoma.

Based upon recent developments in vegetated rooftops, other typologies are soon to follow.

Several local green roof projects offer public viewing. For instance, in addition to research, a demonstration roof has been constructed at the botany greenhouses on the UW’s Seattle campus. This project was built with the help of Snyder Roofing of Washington, Columbia Green Technologies and the Seattle Area Roofers Apprenticeship Program.

Located just off of Steven’s Way, the roof is split into three plots: one managed by the UW farm, another dominated by drought-resistant sedums, and the third planted with prairie species specific to the Puget Sound/Georgia Basin eco-region.

Other local, publicly assessable rooftops include the Seattle Library Ballard Branch and the rooftop garden on the 17th floor terrace of the 1301 Second Ave. building.

Green skins integrate the built and natural environments and provide a range of potential benefits.

When asked what benefits green skins afford, Brian Taylor from MKA simply stated, “There is a synergy of multiple benefits.”

Taylor said the synergy is best achieved through early planning and realistic operational and maintenance consideration for living systems.

In addition to these recommendations, Dr. Ken Yocom from the UW Department of Landscape Architecture would like to see “an active integration of these systems into building systems.”

Local research and design is working to make these systems more feasible, as well as pocket-book and environmentally friendly.

The list of green skin projects in Seattle is getting longer every year. The creative use of these systems affords a lighter urban ecological footprint as well as a more pleasant built environment. There are local research and city initiatives to increase understanding, as well as efficiencies in planning, design and construction.

As far as the skin of the Emerald City goes, it is getting greener, and hopefully cleaner, by the minute.

Danielle L. Pierce is a landscape designer and GIS analyst with ESA Adolfson. In her work, she balances theory and design, innovation and application to improve the built environment.