Going modular? Think of the factory as a big subcontractor

Off-site construction (OSC) or the slang — modular — appears to be gaining acceptance in the greater Pacific Northwest.

Several major developers are considering the use of modular and Jim Daly of Daly Partners is poised to begin construction on a 49-unit project in Belltown within a few months.

In addition to residential projects, the Daily Journal of Commerce has profiled commercial projects such as theater expansions, medical facilities and schools. Also, nonprofit providers of affordable housing are exploring the use of modular to achieve their budgetary goals. 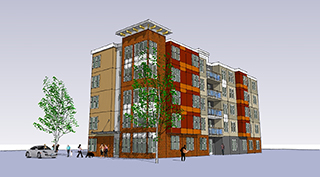 Image by Stricker Cato Murphy Architects [enlarge]
Greenstar Building Systems is working on this apartment in the Bay Area for developer Gary Danklefsen of Seattle. Its micro-suites will help keep rents attractive.

Modular building techniques have been used worldwide for decades, and it is a prevalent and accepted construction alternative east of the Rocky Mountains.

Though there are several projects in the West which have been constructed using modular, it is only recently that the Pacific Northwest has begun to embrace the opportunity. A product constructed off-site employs the same building codes, typically uses the same materials and is fully inspected — similar to site built.

The most noteworthy project under construction using modular techniques is the 30-story apartment in the Atlantic Yards area of New York City. There are several more in various stages of design and construction in the Northeast.

The areas of the country which are enjoying a mini-boom of construction and employment due to oil and mining have opted to use modular as a method to provide worker housing in an efficient manner. Hotels and apartment buildings are the favorites of developers who need product quickly.

In the recent past, the emphasis placed on OSC alternatives focused solely on “how much in hard costs can I save?” While the savings in construction costs are an important avenue to explore, more developers are adopting the internal rate of return (IRR) approach to their projects. The savings in time, early rent up, indoor construction, lowered soft costs and general conditions are but a few benefits that Pacific Northwest developers are considering in their IRR analyses.

One of the most common misunderstandings in the use of modular is the loss of scope for the various members of the development team. The factory that produces the modular product is simply a large subcontractor to the general contractor. Furthermore, the project still requires an architect of record, a structural engineer and all the other disciplines that lead to a successful project. The factory simply constructs what the architect has designed and takes its direction from the developer, architect and engineers that are a part of the team.

In all industries there are always those who go first. These forward-looking developers have analyzed the possibilities and decided that they can’t keep doing the same thing over and over and expect a different result.

Randy Duggan is a regional sales manager for Greenstar Building Systems. He acts as a consultant through his company Modular Consulting Group of Cashmere, Chelan County.