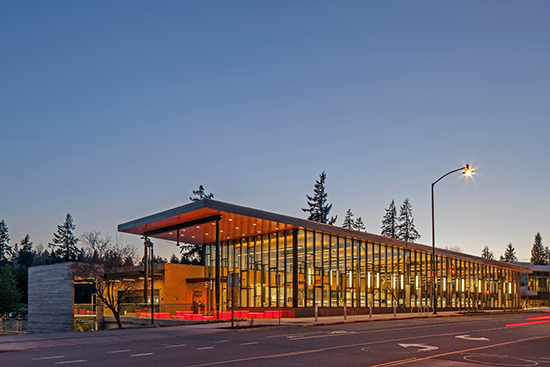 Photo by Frances Zera Photography [enlarge]
Synergy came up with a contingency plan after the glass supplier for the floor-to-ceiling windows went out of business.

The city of Newcastle’s 15,000 residents can commute easily to some of the best jobs in the Pacific Northwest, then return home to live near natural areas, trails and other opportunities for outdoor recreation, including the Cougar Mountain Regional Wildland Park. But one thing was missing for this community: a library.

Synergy Construction was hired by the King County Library System to build the Newcastle Library under a $5.6 million contract.

One of the major challenges of the project turned out to be the troubled economy, or according to Synergy, “the decreased viability of many of the sub trades.” Eight subcontractors went out of business during construction, so Synergy had to replace them quickly with others, plus take on some of the specialized work itself.

The glass manufacturer failed just before the scheduled installation of the floor-to-ceiling windows on three sides of the building, plus extensive glass work inside. Complex layouts and screen patterns had to be quickly transferred to a new vendor and contingency plans had to be implemented. Synergy installed reinforced plastic around the entire perimeter to serve as weather protection and allow interior finishes to proceed while the glass supplier worked to catch up.

Doing things out of sequence put a lot of pressure on the entire project team, but Synergy’s management worked closely with the subcontractors and the city to complete the project.

The building is highly sustainable. It is heated and cooled by a geothermal system with wells drilled deep into the ground and a looped network of water circulation pipes that use the earth’s constant below-ground temperatures. The huge floor-to-ceiling windows have brain wave patterns screened into the glass that activate shades when the afternoon sun becomes too intense. Inside temperature is regulated with computer-controlled window vents.

The library is topped with a fully vegetated green roof that also serves to slow and filter storm water.

The team’s primary concern was ensuring the safety of the Newcastle residents. To allow for that, Synergy scheduled deliveries during off-peak hours and created safe pathways for foot traffic.

A site-specific safety plan and job-hazard analysis were created using a collaborative effort between Synergy personnel and its subcontractors. The result was no medical or time-loss accidents during the 11,576 hours worked on the project.