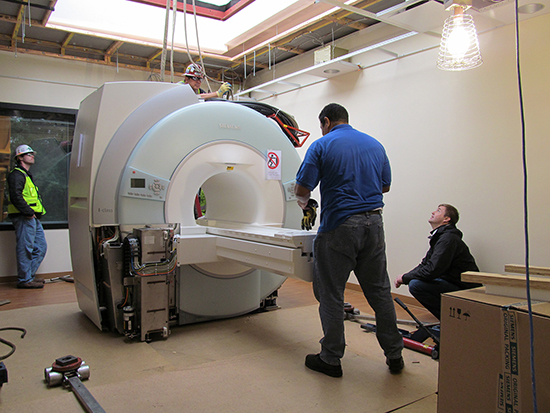 As Premier Orthopedic Group outgrew its old offices in Edmonds, it planned a new building just north of the old one.

The new three-story, 27,000-square-foot facility would not only have to be functional, safe, comfortable and attractive, but it would also need to accommodate cutting-edge equipment, such as an open-bore MRI system, digital radiology and DEXA bone density scanner.

SME Inc. of Seattle was brought in as the electrical contractor for this sophisticated and challenging job.

The construction team developed a construction phasing and sequencing plan to accommodate the aggressive schedule and complex technology installation needs of the owner. In phase one, electricians and plumbers roughed in some 9,000 square feet in a string of 17 exam rooms in the northeast corner of the clinic. From there, the team continued in a clockwise rotation around the building with phases two through five, including lighting, the ambulatory surgical center, three operating rooms and an MRI room.

Three systems were particularly challenging. First, the Stryker surgical booms required a number of dedicated power receptacles and circuits to interface with their wall controls and cabinet power supplies. SME designed a conduit rack system and pre-bent all the conduits in its pre-fab shop, delivering them just-in-time where, according to the company, “they went together like Tinker Toys.”

The second challenge was with the X-ray equipment, which required design changes to the electrical piping and distribution between the X-ray machine, power unit and control station.

The MRI room was the third challenge, requiring specialized filter components through which to route and isolate all the power and control circuits between the MRI room and the equipment room. SME electricians had to ensure that only non-ferrous materials and containment measures were used within the magnetic environment of the room.

SME had to come up with an innovative solution after an unexpected discovery early on of bog soil conditions in the area of all of the proposed service feeders, the main electrical room and generator pad feeders. The company assembled stainless steel conduit racks and tied their supports into the slab-on-grade concrete pour rather than just placing the large conduits directly on the ground, which is a traditionally quick and inexpensive method. This innovation assures that when the soils sink, the critical system feeders will still remain intact and functional.

SME’s safety program for the project included a site-specific plan, and discussions about and solutions for hazards unique to the project. In the 7,788 hours worked on the job there were no medical or time-loss injuries.